Home Special Reports Ochei’s Three Times A Failure: The Beginning Of The End? 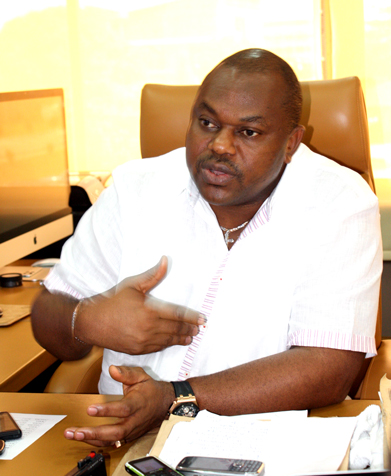 The result of the senatorial electorial election as released by the Independent National Electoral Commission (INEC) in Delta, revealed that former Speaker of the Delta State House of Assembly, Rt. Hon. Victor Ochei, had lost his senatorial ambition to Barr. Peter Nwaoboshi. Ochei contested the Delta North senate under the platform of Accord Party while Peter Nwaoboshi contested under the Peoples Democratic Party (PDP). Although Ochei had been a member of the PDP prior to the senatorial contest, he decamped to the Accord Party having lost the governorship primaries to Senator Ifeanyi Okowa on December 8, 2015. Nwaoboshi on the other hand was the former Chairman of the state PDP but decided to go for the senate knowing that the shift of power to Delta North would not favour him to remain as the state chairman of the party.

Ochei’s entrance into the senatorial race was least expected by the people of Delta North. He caught everybody by surprise. Political watchers in the state were of the opinion that having lost his governorship ambition to Okowa who is from the same zone with him, he would form a formidable team with him in the fight to win the governorship for Delta North. But he sprang a surprise when a few weeks after the governorship primaries, speculations went wide that he was aspiring to go for the senate. And from speculation to reality, his posters began dotting every part of the zone as the elections drew closer.

But somehow, it seems the gods were not interested in him holding any political office after the expiration of his tenure in the Delta State House of Assembly. And at the end of the election and the collation exercise at the office of the Independent National Electoral Commission, INEC, in Asaba, his opponent and candidate of the PDP, Peter Nwaoboshi, was declared winner of the Delta North Senatorial election. The announcement of the result shook Ochei to the foundation but he could not change the result. This was so because as the results were being released from the different council areas, it was getting glaring that he would lose the election to Nwaoboshi and there was a minor fracas between them. He was once in PDP, so he knew the game. He understands the power play in the party, but this time, he was the victim. Although a whole lot of people were of the opinion that he won the election, he seemed helpless as those who were with him were less powerful than those working to ensure the PDP candidate emerged winner of the election.

One thing in Delta politics which Ochei was expected to know is that Delta is one of the strongest grounds of the PDP and it would take more than the power put together by Buhari’s team to crush the cabals backing the PDP in the state. Any party that is not PDP in Delta may be heading for doom as the PDP is ready to surmount all it could to remain in power undermining whose ox is gored.  And so, Ochei, again, lost the senatorial election. He left the INEC office with mournful face, brooding over the fate that had befallen his political career.

His woes began when the Governor of Delta State, Dr. Emmanuel Uduaghan, was alleged to have plotted his removal from office as Speaker of the Delta State House of Assembly. Prior to his removal as Speaker, he was the centre of excellence. He wielded much power as Speaker of the House. It was learnt that many members of the House were of the opinion that he was being backed by the governor, hence no one was willing to raise an eyebrow against his moves, as it was believed that he was the apple of the Governor’s eyes. But they were wrong. He also had much money at his disposal having executed some projects that fetched him much money from the Delta State Government.

He was waxing stronger and stronger in the house. And when it came to the quest for Delta Governorship, Ochei was one of those who signified interest in the race. Everyone in Delta believed that Ochei was heading to Government House following the perception that he was being supported by the governor. While he was playing his game oblivious of the environment, enemies of his rise were instigating the governor to plot his downfall so as to scuttle his governorship ambition. Among the over 20 persons who signified interest in the Delta Governorship, his was with a difference.

Many dreaded his participation in the race as it is believed that Ochei was a big fish in the game and a threat to many of the contenders. Hence, various meetings were held all aimed at discouraging him from the governorship race. It was alleged that the Governor, Emmanuel Uduaghan, once invited him with the Chairman of the PDP in the state, Peter Nwaoboshi and others to a meeting abroad and he was bluntly told to drop his ambition or face impeachment.

It was also gathered that if Ochei was allowed to run for the governorship, he would beat every other person hands down and become the governor of the state. Hence, and perhaps, some powers in the state were not ready to cede power to him, and the plot for his downfall began very powerfully. As the plot thickened, he was again told to either resign from the office of the speaker or abandon his governorship ambition. While the pressure was in progress, signatures were being collected from members of the house, having discovered that the governor was not backing his 2015 ambition. The impeachment plot had begun directly from members of the house which he headed. Two options were left for him at the moment: to either resign honourably or face impeachment and the conspiracy was strong against him.

But as soon as he got wind of the plot, he quickly resigned three days to the date of the impeachment. And instead of impeaching him on the floor of the house, his resignation letter was read before members of the house. It was alleged that Uduaghan said he can’t give Ochei money and at the same time give him power. It was also revealed that the former State Chairman of the PDP, Peter Nwaoboshi, who incidentally won the senatorial contest and Senior Political Adviser to the Governor, Chief Ighoyota Amori, who also contested the Delta Central Senatorial election, which has been declared inconclusive, connived with the other legislators to plot his removal from the office of the Speaker and eventually drown his 2015 governorship ambition.

But against people’s perception that Ochei’s resignation from office of the Speaker would weaken his ambition, Ochei was not perturbed. He persisted, insisting that he would continue in the race to the office of the governor.  And on December 8, 2014, the PDP governorship primaries were held and Ochei scored 185 votes, emerging 3rd among the over 23 contenders. He lost to Senator Ifeanyi Okowa who scored over 400 votes in the primaries held at the Cenotaph in Asaba, the Delta State capital. That failure marked a second round of Ochei’s fall in the race to achieve a desired goal and attain a political fortune with a promise of creating a better life for the people of Delta State and specifically, Delta North.

Ochei was still not shaken as he, again, left the PDP and veered to the Accord Party to pursue a Senatorial ambition. And last Saturday, March 28, the Augean table, again, turned against him and he lost the race to the upper chamber of the National Assembly. And as it is now, it remains unclear the next line of action for the legislator. Would he team up with Okowa, who had continuously said if he must campaign for him, he should leave Accord Party and join him in the PDP? Or would he parley with the APC which is now the leading party to wrestle power from the PDP in the state? Or should he go back home to Issele Uku, his country home, after the dissolution of the current assembly on June 29, 2015? Can he sum up the courage to go back to the PDP and plead for forgiveness and restoration so as to get some appointment from the Governor-Elect, Senator Ifeanyi Okowa? These are many questions begging for answers. But time and unfolding events will tell if Ochei would align with any of the foregoing possibilities in order to remain relevant in the politics of Delta State.