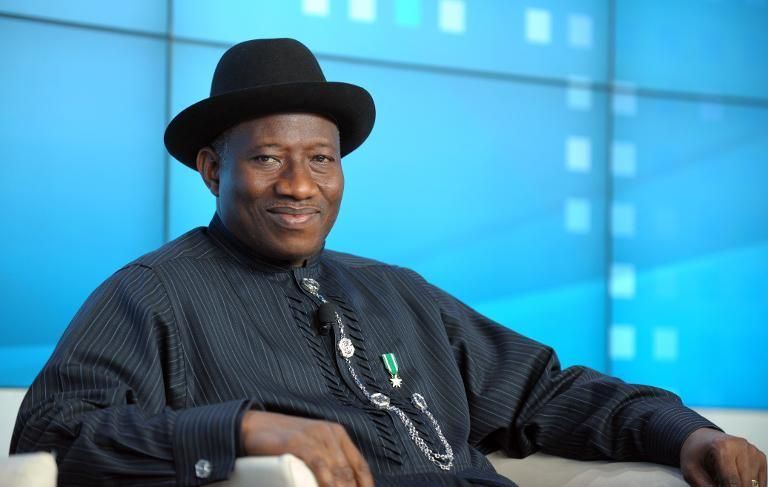 * As Imo APC Women Accuse Okorocha Of Deceiving Them To Protest Against President
President Goodluck Jonathan on Tuesday restated his promise to ensure the South-East geopolitical zone gets equal number of states with other geopolitical zones, if re-elected.

Speaking when he paid homage to Imo State Council of Traditional Rulers at their secretariat in Owerri, the president said, “before other zones will talk of getting more states, the people of South-East must first get one additional state to bring them at par with other geopolitical zones.

Nigeria currently has six geo-political zones and each zone has at least six states except South-East with five and North-west with seven states.

Jonathan, who described the people of South-East as his taproot at the national level, said he was overjoyed by the level of support he enjoys from the people of the zone.

The president said that his visit to the royal fathers was to solicit for their prayers and support ahead of March 28 presidential elections, urging the people to massively vote him and other PDP candidates.

Responding to the comment that Imo Governor, Rochas Okorocha bared some Imo traditional rulers from coming to receive him, Jonathan said it was unfortunate that such was the plights of traditional institution in the state.

“In England, traditional institution is a highly respected position and nobody makes jest of it.

“It is quite bad that traditional rulers are being subjected to such treatment here to the extent of threatening to dethrone any of you that come to receive the president’’, he said.

Jonathan assured the royal fathers present at the event that nobody would dethrone them, adding, “it is unfortunate that the same man that marketed himself in 2011 is that man that is acting in such a manner today.’’

Earlier, HRM Eze Cletus Ilomuanya, the chairman Imo State Council of traditional rulers told Jonathan that south-East people are highly expectant of additional states, as well as to enjoy other benefits of democracy.

“Mr President, Imo traditional rulers are about 625, but in this hall we are about 52 in number, the reason is that Gov. Okorocha early this morning announced through the state radio to dethrone any of us that come to receive you’’, he said.

He however urged the president to go ahead in his good work, adding that his transformational leadership was highly felt by Nigerians.

Meanwhile, Hundreds of women of Imo State loyal to the All Progressives Congress, APC, yesterday regretted that they were deceived and brought to Owerri, the state capital to protest against the coming of President Goodluck Jonathan to the state.

The women had stormed the chambers of the Imo State Council of Traditional Rulers, Owerri, to protest the use of the place by a faction of traditional rulers led by Eze Cletus Ilomuanya to receive the president, saying the place was a women development centre where they were supposed to hold seminar.

They blocked the roads to the centre, a development that led to the police and the soldiers begging them to give way. But they insisted and stayed put.

They were however chased out of the place by some policemen through the use of tear-gas canisters.

But speaking with journalists, one of the women from Okigwe LGA, who was clutching her baby by her side, Mrs. Ngozi Anorue said they were invited by the governor for a seminar at the centre.

“But, we didn’t know that they only brought us here to protest against the president of our country. They invited us as women leaders from our communities, that’s why you could see hundreds of us. We thought we were coming for CGC seminar as they told us, we didn’t know we were called out to come and fight their own fight.

Another woman who also spoke with journalists lamented that they were told to come for seminar only “for the agenda to be a protest against the president we consider as our brother”.

The angry woman who refused to identify herself accused the state government of being fund of using the women and children to fight the governor’s political battle.