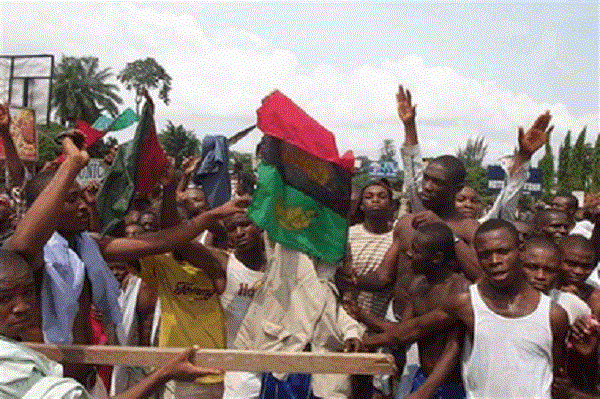 Unidentified soldiers have inflicted severe injuries on a member of the Movement for the Actualization of the Sovereign State of Biafra (MASSOB), Jonah Samuel for wearing a cap with Biafra inscription.

The soldiers who were in two hilux patrol jeeps were said to have accosted Jonah wearing his Biafran camouflage cap at Obikabia junction, New Umuahia road, Ogbor Hill, Aba, parked their vehicles and after a little interrogation started beating him before leaving him in a pool of blood.

Eyewitness accounts told 247ureports.com that if not for the efforts of some Good Samaritans who took Jonah to the hospital, he would have given up the ghost due to the cruel beating he got from the soldiers.

As at the time of filing this report, Jonah is still receiving medical attention at an undisclosed hospital in the city.

When contacted on the incident, MASSOB’s Assistant National Director of Information, Sunny Okereafor it was disgusting that it was soldiers could brutalize Jonah who was going home after participating in a the ‘Jega Must Go’ protest action organized by the group.

He accused Nigerian security operatives of bias against MASSOB while protecting other groups, stressing that soldiers disrupted MASSOB’s protest and beat up their members but gave cover to Odua Peoples’ Congress (OPC) in Lagos when they carried out similar protest.

“When MASSOB held its protest, soldiers disrupted it and brutalized our members, but when OPC held theirs in Lagos over the same issue, those that brutalized us gave them protection.

“This hatred and discrimination against Ndigbo has been going on over the years and that’s why we are seeking for Biafra, to be on our own.”