More evidence is emerging of alleged summary executions by Malian forces in the north of the country where French forces are completing their operations.

An eyewitness told BBC Newsnight he saw three Islamic students shot dead in a public place because they failed to show identity papers.

The Malian government has promised to investigate the allegations.

It says there should be no revenge attacks against people suspected of collaborating with the rebels.

But there are fears that militia due to be deployed to the north are seeking vengeance against Islamists and Tuareg separatists.

The main allegations against the Malian military involve claims of killings in Sevare, in the centre of the country, after Islamist rebels captured the nearby town of Konna on 10 January, prompting the French intervention.

The eyewitness, who wanted to remain anonymous, told BBC Newsnight that the three students in Islamic dress were arrested as suspected infiltrators. Their hands were tied behind their backs and they were made to kneel on a patch of waste ground.

“I heard one of them say, ‘For the sake of God, don’t kill me. I’m not the enemy, I’m just a student of the Koran,'” the witness said.

“But one of the military guys said, ‘Don’t listen to them, they’re infiltrators’. They discussed what to do, then one said, ‘Fire!’ and they shot all three of them. They dragged them by their feet and threw them into a well.” 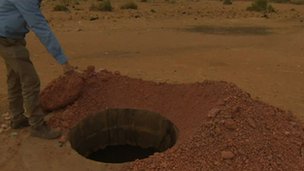 The following day he says he saw two more suspects – an old man and his son – shot in similar fashion.

The BBC found bloodstains on three wells in the area. What appeared to be human bodies were clearly visible at the bottom of one.

Investigators from New York-based organisation Human Rights Watch, who have just returned from the area, believe the total number executed by Malian forces in Sevare, either soldiers or gendarmes, may be as high as 20 or 30.

Malian army sources told the BBC that no innocent people had been shot.

The allegations come as an unarmed militia, the Ganda Izo or “Children of the Land”, made up largely of refugees from the north, prepares to deploy to Gao, Timbuktu and other liberated towns.

Their task will be to identify suspected infiltrators and collaborators and hand them over to the authorities.

Moussa Ould Daoud, a Malian army instructor working with them, said: “There are rebels among the population. Who will show the army who the rebels are? The militia. They know the territory and can say who was a rebel and who wasn’t. They can prevent ambushes or suicide attacks.”

Militia commanders said all suspects would be dealt with by due process of law. But the Ganda Izo is the successor of another militia, the Ganda Koy or “Masters of the Land”, which has been accused by human rights groups of atrocities against civilians, mainly ethnic Tuaregs, in the past. 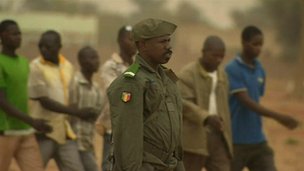 One militiaman, who did not give his name, said the group’s aim was revenge for crimes, particularly rape, committed by the rebels, when they took Timbuktu and other towns last year.

Another, Moustafa Ag Sidi, said: “They tied up the head of a family and then raped his wife in front of him, and then his daughter. I saw it with my own eyes. I thought my family would be next, so we fled. They raped many women. They took them into the dunes for two or three days and then they came back for more.”

As fear of reprisal attacks spreads, ethnic Tuaregs have largely disappeared from towns in the centre and south of Mali. Most have fled to refugee camps in neighbouring Burkina Faso and Mauritania. Others may be in hiding.

Students of the Koran and others with a particularly devout Muslim appearance also fear they may now be singled out for attack.

A student in the town of Mopti, Muhammad Barry, said he and others were now afraid to study the Koran outdoors for fear they might be arrested. But he insisted that he and most other pious Muslims had no sympathy with the Islamist rebels.