This is a sad story of a Nigerian who is a pastor in one of the new generation churches in  Vienna  called Grace Ministries International. Pastor Joshua Esosa is from  Edo   State  and in the narration of his unbelievable ordeal, he recounted how he had been arrested, framed up and jailed for a crime he said that he had never committed. His experience as he told it could only be likened to the American HOLLYWOOD films packed with action and suspense and as such incredible and scary for most people who are blacks and especially Nigerians living in  Austria . We have heard that similar ugly stories happened many years ago but in recent years one can vouch that the Austrian police has made tremendous improvement that experiences like this one of Pastor Joshua Esosa is strange to most of us. Therefore, my worries which should be the feelings of most people are not against the Austrian police as an entity but rather against these few groups of people that have decided to pervert the course of justice by protecting the real criminal if the story of Pastor Esosa should stand. Consequently, I appeal to the Austrian police to help and dig out the truth since the crack down is not against race or colour but rather against evils and agents of Satan within us. We all should be partners in progress in circumstances like this since every system in every country is never completely free from bad ones which Austria is of course not immune to. Therefore, my sincere appeal is not only to the police authority but to the entire Austrian authority, corporate bodies and individuals that are concerned that our society is being threatened by idiots who make hard drugs accessible to our children to help in any way they can to expose the real offender/s in this case so that this innocent man will be set free, that is my humbly appeal.
Globalisation of the world is not only in technology but also in the movements of humans. If Arnold Schwarzenegger who is originally from  Steiermark ,  Austria  could go to the  US  and rose to a point to have governed a state like  California , a Nigerian, Pastor Joshua Esosa should not be ruined and destroyed because he could rise tomorrow to be a wonder turning bishop in  Austria . Injustice done to one person is injustice done to all. Arise, people of conscience!
Here is the story of Pastor Esosa’s tribulation.
“I am Pastor Joshua Esosa from  Edo   State . My story is so sad, humiliating and painful each time I remember that bitter experience of 2nd February 2011.  On this day, I just closed from the church and went straight home in twelfth district in  Vienna  to an apartment provided for me by the church because as at of this time I had problems with my wife and because of the nature of the society we are living in, we were trying to sort out things living separately. At about 11pm on this day, my wife called me and said that she was sick and that I should come home to take care of the children so that she could go to the hospital. It was very unusual that I felt somehow. However, I told her that it was already too late because it would take me about an hour to get to there now and whether she could not wait till the next day. She insisted that I should please try to come. So, I now went to see her. When I got there it was around12 midnight and I had to press the bell because I did not have the key. And before I could open the door the police had already accosted and apprehended me and said, ‘You drug dealer, drug dealer, drug dealer’. And I said, what; me a drug dealer?  I did not even resist them as I allowed them to search me. They searched me and found €600 with the church cash card and said, ‘Yeah this is the drug money’. I told them that €400 of that €600 was the money of the church that I had withdrawn few hours ago from AKH and that if they go to the bank they would see that what I had told them was the truth. 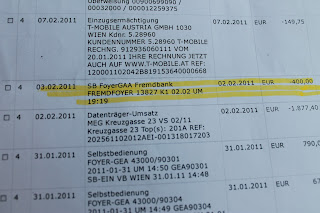