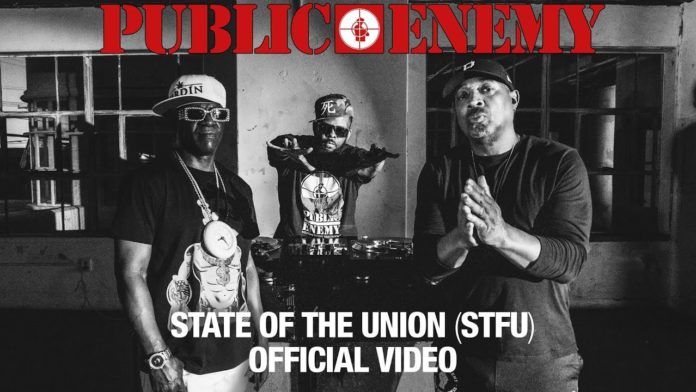 Chuck D and Flavor Flav, members of one of the most important musical protest acts of all time, Public Enemy, have just reunited for a fiery new anti-Trump rallying cry, the DJ Premier-produced “State of the Union (STFU).” In a statement accompanying the P.E. comeback track — which contains unsubtle lyrics labeling President Trump a “White House killer” and “Nazi gestapo dictator” and calls for concerned citizens to “end this clown show” — Chuck D says, “Our collective voices keep getting louder. The rest of the planet is on our side. But it’s not enough to talk about change. You have to show up and demand change.”

The ferocious P.E. single — a surprise release for Friday the Juneteenth — is now available as a free download via the group’s website, where the lyrics can be read in full as well. On the song’s release day, Yahoo Entertainment caught up with Chuck D on the phone for a candid and enlightening discussion of “State of the Union” as well as the hip-hop pioneer’s hopes and concerns about the state of this nation in general. (Video below contains strong language.)

Yahoo Entertainment: Public Enemy just released “State of the Union (STFU)” on Juneteenth, and it’s the anthem we all need right now…

Chuck D: I don’t think it was anything that I considered an “anthem.” I think we’ve experienced four years of Donald Trump, and I could have written this down while doing Prophets of Rage [a political supergroup with members of Public Enemy, Rage Against the Machine, and Cypress Hill that was active from 2016 to 2019]. It was in my notebook: Every time I saw an acronym with a hashtag online or on social media, “State of the Union,” which is “S-O-T-U,” I kept immediately seeing “S-T-F-U!” It stuck in my head, and I wrote it down. And I feel same way — I don’t want to be around people or situations that are toxic, so I just tell them to “stay away from me”! The hook was rather academic, and it says it all.

You say you could have written this song at different times over the past four years. But four years ago when Trump was first elected to office, did you envision that things would be as bad as they have gotten in this country?

Yes, of course, because I knew where Donald Trump came from. I’ve been privy to this guy since the ’80s. I’m not out of the ’90s or of the millennium where they think this guy came out of nowhere with a business agenda for America. I knew he was like a three-card Monte player from New York — a slickster, a huckster. And to me, I just thought it was inconceivable that a guy like this would be president of the United States. But then again, that happened to be the direction that the United States was going in anyway, even since the ’60s. [The presidency] became more of a beauty pageant than people doing the job.

So were you or were you not surprised when Donald Trump won the 2016 election?

I saw it coming, because I knew that the country was trying to make a statement: “How low can we go with Trump? We can’t really lose. We can’t be no worse off than having that black guy who I didn’t care for!” A lot of people took it to the extreme. And also some people had denial too, because you can go to some parts of the United States and it’s changed very little in the last hundred years. I mean, this battle has been going on ever since the existence of cities.

So what are your fears, concerns, or hopes for this presidential election coming up?

This new song doesn’t deal with November. The song deals with telling this dude to leave as soon as possible. Yeah, do the Nixon thing. See, I’m old enough to go back and remember when it got so bad that Nixon had to leave. We hope that this happens with Trump. And we can even deal with four or five months of Pence, to work on that, but this dude has got to go now. If he was used as a weapon, a shield, or a distraction, his time is over. It just shows the arrogance of some people in the United States of America where the world doesn’t like this dude, and half the country doesn’t like this dude — so why is he president?

When you get to the election side of things, it’s a beauty pageant. And I don’t really get into that. What I can say is that’s a Public Enemy conversation, because we’re international and I was able to be affected [Trump’s] policies all over the planet. I take that personal. I’ve taken Donald Trump personal ever since what he did with that Central Park Five s***. So, I go back to saying that this dude just don’t need to be in office. Go back to your f***ing casinos, your hotels, the USFL or something, dude. You just shouldn’t be president. It’s not even a hatred — it will be hatred if you get four more years — but really it’s like, it’s the stupidity of people. He got one over on Middle America.

Well, assuming that Trump does last until this next election in November, are you going to get involved with any rallies for Biden or anything like that?

No, I’m here for guidance. Young people are going to have to fight for the world that they’re going to be in. I really, really appreciate this time where you see so many voices out there fighting for the world. … Every generation has its own movement, and I believe that OGs should stay in their lane and be there for [the younger generation]. And I think that’s one of the mistakes that this country makes: When you look at the people running for president, and whether you take Trump at 74 or even Bernie Sanders, who I like his ideas, but at 78, 79, it’s like, come on, give me a f***ing break. Do the math. So, I do believe that there should be a retirement age and an age limit for people in positions of power, and I think the older people should be here for counsel, whether they’re trying to set an agenda or fight against one. And that’s where we’re at right now. I really relish this time when I’ve seen so many young voices of all sizes, shapes, and colors being able to answer to injustice.

Do you think the younger generation over the eight years that preceded Trump’s presidency got complacent, because of the fact that Barack Obama was in office and things seemed like they were progressing in a positive direction? So they didn’t put in that work, because they didn’t think they needed to?

I think a lot of people had different expectations of what a president like Obama would be able to do, or was supposed to do. But the thing that got me voting for President Obama in the first place, besides the obvious, was he was in Denver at the Democratic National Convention, and one of his key lines that resonated with me was: “Yo, it’s not about me. It’s about what you guys can do out there. It’s about you.” Yeah, I think there was a complacency from the top to the bottom of the society. What will eliminate the complacency is you’ve got to get rid of the arrogance. And I just think people in the United States have been elitist. They’ve been arrogant. They think we’re the only place in the world. They’re taught to think that we are the best place in the world. And they sit on that and they just expect it to be good. You know, if you go from a country where it’s an effort to even flush a toilet, and you come to United States and see toilets flushing easy, then yeah, you’re privileged. But if you don’t connect to the rest of the world, you get locked in your privilege. And I think that goes for a majority of United States.

But now you do have hope that things will change?

I have one last question about something I want to clear up: “State of the Union” reunites you with Flavor Flav. So, was there really no feud going on between you two?

Listen, I’m the guy that’s in charge, and I have to motivate Flavor Flav to work. … We ain’t got no feud. That’s my guy. But at the same time, I was there to show him that I’m serious. And in order to work, you got to work, that’s all. You can’t just be a “star.” 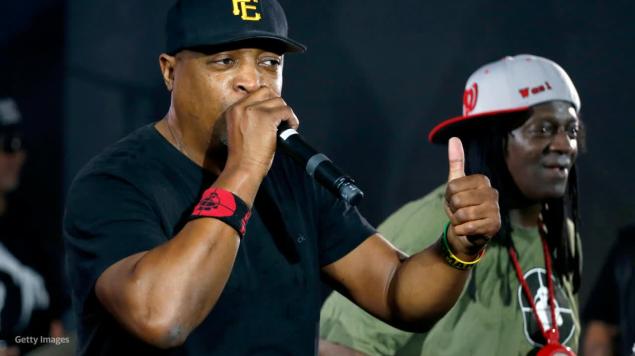 Earlier this year there was a public feud between Public Enemy members Chuck D and Flavor Flav; today the two released a song off Chuck’s latest project, “Loud Is Not Enough,” the single called “Food as a Machine Gun.”