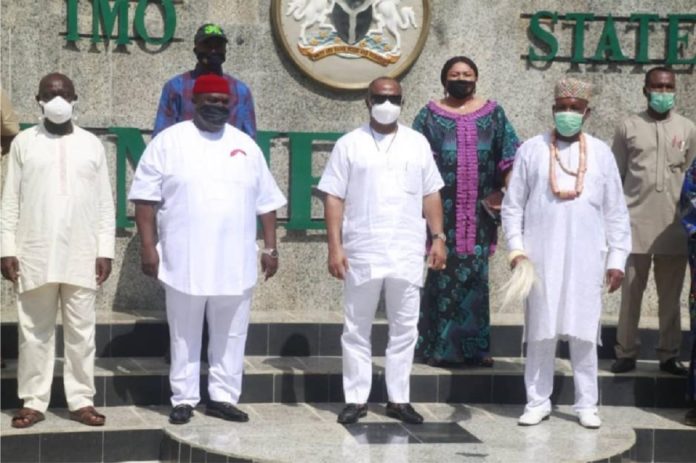 Okigwe Elders Forum has expressed gratitude to His Excellency, the Governor of Imo state for carrying the zone along in the scheme of things and assured him of the continuous support of the people to his administration.

They have equally donated 4 parcels of land to the Government for the purpose of Housing estate which the Government intends to build in the 3 zones of the State with Okigwe inclusive.

Addressing the Elders at the Executive Chambers, Government House Owerri, Governor Uzodimma expressed his happiness at their support and understanding of the policy direction of his administration.

The Governor reiterated that he will not relent in seeing that all the laudable promises and policies of his administration are implemented to the later.

Governor Uzodimma noted that on assumption of office, he promised that he will build Housing Estates for Civil Servants and low income earners in the State. This policy, the Governor emphasized he must actualize.

While thanking the leaders of the zone for their unique genuine in providing the lands without Government asking, the Governor assured them that Government will do the needful by ensuring that work starts at any of the sited chosen immediately.

The Governor called on other zones in the State to emulate the people of Okigwe while stating that Government will need more lands to invest especially in agriculture as a way of empowering the youths and ensure food security for Imo people through mechanized agriculture.

Earlier, the Chairman of Okigwe Elders Forum, His Royal Highness, Eze Oliver Ohanwe applauded to the governor for his proactive actions in governance since he assumed office. He noted that Okigwe people are happy with the government hence, they all agreed in unison to donate the 4 parcels of land situated in different parts of the zone for the Housing Estate.

Adding his voice, a leader of the zone, Prof. Maurice Iwu stated that the 4 parcels of land which are 9,000 hectares especially the one at Umuna in Onuimo LGA, is adjacent to the Imo State University School of Engineering. The second one is at PDS Old electricity site at Amaraku bordering Anara. The third is at Obolo in Isiala Mbano formerly earmarked for Federal Housing project while the fourth is at Obowo, near the Abadaba Lake.

Prof. Iwu assured that sites were painstakingly chosen so that government will not have any community issues on entering the lands. This is because; community leaders agreed and are in support of the programme.

Eulogizing the Governor and his style of administration, an apex leader of the zone, Chief Tony Chukwu commended the Governor for performing above expectations as according to him:”People thought on assumption of office that he may not be able to handle the intricacies of government. But on the contrary, he has surpassed all expectations.”

The event which was graced by some members of State executive Council had notable leaders of Okigwe zone including the Speaker, Imo State House of Assembly, Rt. Hon. Chiji Collins, the Secretary to Government of Imo State, Chief Cosmas Iwu and other prominent traditional rulers present.