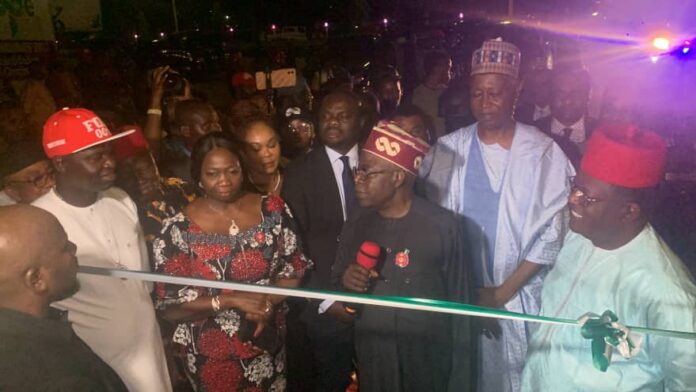 The All Progressives Congress Presidential candidate for the 2023 general election, Ahmed Bola Tinubu, has commenced his campaign visit to Ebonyi State with commissioning of some of Governor Umahi’s projects within the State.

Tinubu who arrived the State Tuesday evening was earlier received at the Akanu Ibiam International Airport, Enugu by some prominent leaders of the State and APC stalwarts.

Speaking while commissioning a dualized road leading to the new Government House, Centenary City, Abakaliki, the APC Presidential flagbearer, described his experience so far in Ebonyi State as a story of joy, progress and development.

He lauded Governor Umahi for his vision in building future leaders, describing him as an accomplished leader.
He further pledged his full support for the APC governorship candidate in the State, Right Honourable Francis Ogbonna Nwifuru, and called on all Ebonyians to employ their renowned courage and determination to support Nwifuru and other APC candidates to victory in the coming elections.

“For Ebonyi, we have somebody who is getting ready to take over, and we are with you.

“We will cooperate with you.
“It is a joy to be here to witness progress and development.
“This is what is important.

“I know Ebonyians for their determination, courage and independent mind to do things, and I have seen some signs since we started coming
“May God bless you.”

Introducing the project, Governor Umahi explained that the road was part of the master plan of his administration to construct quality dual carriage road with solar streetlight around the new Government House.

He told the APC Presidential candidate that the projects he had seen in the State were just a tip of the iceberg.

“If you come for commissioning in Ebonyi State, you can commission every day for thirty days, and you won’t exhaust the projects.

“So, we are not very keen on commissioning.

“We are just keen on finishing projects and deploying them for use” Umahi stressed.

Tinubu would be meeting with some stakeholders in the State, as well as commission more projects.

He would be hosted at the Ngele Oruta Township Stadium Wednesday for continuation of his campaign visit in the State.