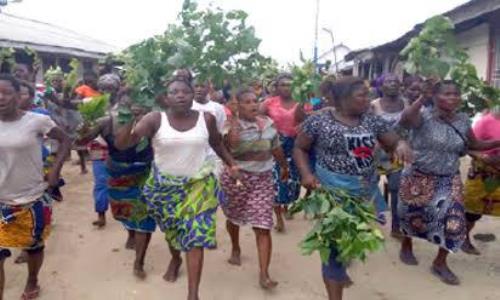 Advertisement
The Movement for the Survival of the Ogoni People (MOSOP) says an alarming number of Ogoni children are showing signs of cancer, raising fears of a more serious health crisis and gradual extinction of the Ogoni people in Nigeria.
President of MOSOP, Fegalo Nsuke made this known yesterday at the national secretariat of the movement in Bori, headquarter of Khana local government area of Rivers State when he met with community coordinators of MOSOP from Zaakpon, Kor, Bori, Yeghe and Kaani.
“We are in real danger. And our investigations reveal that more Ogoni children are developing signs of cancer. Specifically, 80 percent of children under the age of 10 diagnosed with cysts in the mouth are from the Ogoni region” Nsuke said.
“This is very alarming and to the best of our knowledge, it suggests a significant genetic mutation or an unsafe environment that makes our children prone to cysts. In the present circumstance, the UNEP report has highlighted the fact that the benzene pollution in our waters is some 900 times more than acceptable level and that is a cause for serious concern especially now that we are seeing likely consequences” Nsuke said.
According to the MOSOP leader, the discovery underscores the need to revisit the entire cleanup exercise which he said has been used for political appeasement and not actually an effort to correct the damaging effects of pollution in the Ogoni area. He regretted that the situation in Ogoni was already a humanitarian crisis and the lives of children and the people were now at stake which put the entire future of the Ogoni nationality in danger.
Nsuke said the failure of government agencies responsible for the implementation of the UNEP report to uncover these dangers during their orchestrated health programmes is testament of the cover-up and deception the government called a health audit under the ministry of environment.
He said MOSOP will not take this lightly with Shell and the Nigerian Government noting that the organisation was very determined to take this matter to the global stage for the entire world to see what a multinational in alliance with the Nigerian Government is doing and has done to our innocent children and all Ogoni people in their desperation to make money.
“Shell is culpable in the destruction of the Ogoni ecosystem. Polluting our waters and our very lives. The world must see and know about this evil of Shell in Ogoni so they can better appreciate the company’s genocidal operations which have been executed in a sleek alliance with the Nigerian government for several decades.” Nsuke said.
MOSOP called for an immediate health audit on the Ogoni people noting that the program must be comprehensively carried out in every Ogoni community. He said the underground waters in the entire Ogoni has been scientifically proven to be contaminated, emphasizing that the humanitarian crises in Ogoni is a deliberate creation of Shell and the Nigerian government.
“The situation in Ogoni is a humanitarian crisis which the Nigerian government deliberately and systematically executed. Imagine that the UNEP report on Ogoni was released in 2011 highlighting serious health dangers and the government took no action until six years later when significant damage would have further occurred” Nsuke said.
The MOSOP President called on Ogonis all over the world to rise up against the genocide if the Ogoni nationality will be rescued the land and people canbe saved from ultimate death.
Signed:
Alex Akori
Secretary-General,
MOSOP