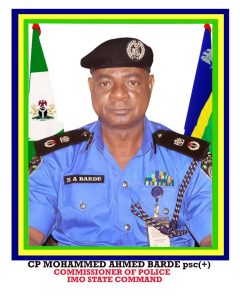 There was pandamonium Tuesday at Awaka Community Owerri North LGA over a bomb scare.
Our reporter gathered that bomb scare emanated from a Chief Magistrate Court located in the community when Staff and Litigants were running for safety.

It was gathered by a lawyer who came to the court to file court processes that the Senior Registrar, even asked him to return tomorrow if there will be work , even as she directed him to call him before coming.

The lawyer who simply gave his name as Barrister Ogbonna , revealed that the registrar described the security challenges being faced in the town as a result of Governor Hope Uzodinma’ s hatred for Ndi Igbo and IPOB in particular.

Furthermore, he wondered why a registrar of the court would direct the closure if a court over the rumour making the rounds that gunmen were allegedly coming to bomb courts in Imo State.

When our reporter visited the court located inside the Amuzi Village hall at about 12: 30 pm, it was discovered that the court was under lock and key, just as some villagers deserted the area.

When contacted, an indigene of the community, who may not want his name published, stressed that, ” We are confused as every other person and the panic caused by the workers of the court has jeopardised every active in this community today. We don’t know where they got the information that gunmen are coming to bomb the court, but for safety measures, we are taking precautions and will make sure that our area is protected from criminals who are parading as gunmen.

Efforts made to speak with the Senior Registrar of the Chief Magistrate Court Awaka, Mrs. Janefraces Chris- Chinedu and the Chief Registrar of the Judiciary High Court Owerri were futile as their lines rang without response and could not be gotten respectively.

Furthermore, the Police Public Relations Officer(PPRO) Imo State, Mr. Micheal Abatam could not be reached as at press time.