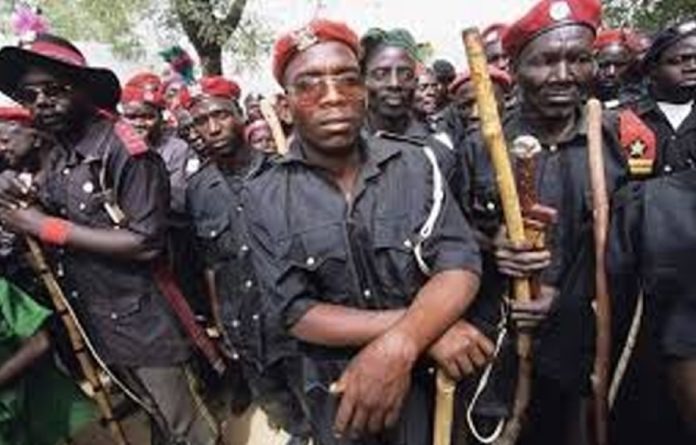 A group of security operatives, popularly known as local vigilante, operating at Tarzan Junction in Onitsha, Anambra State, has been accused of using guns to rob travellers at night, in the name of ‘Stop and Search’.

It was gathered that the security operatives, numbering about six, usually position at the ever-busy Tarzan Junction every night, with their Pump-Action (gun) with assumed original intent of securing the environment and the road users.

It was, however, reported that the security men, who usually dress in blacks, have totally deviated from their primary assignment of Security to robbery, as they now rob road users, especially pedestrians and stranded travellers, in disguise of running security checks on them.

One of the victims (a female), who spoke with our correspondent last night said the security personnel robbed her of her seven thousand naira (N7,000) the penultimate night (Saturday) in the name of ‘Stop and Search’.

“My brother, if I tell you wetin this people do me yesterday…,” she said (in pidgin English).

Narrating her ordeal, the victim who did mention her name before she started talking, said, “I was coming back late from a journey, with my bag and my two Android phones, heading to Awkuzu. I didn’t see Keke, I didn’t see bus, because it was already very late (around around after 8).

“My fellow passengers slept in the park of the Peace Mass Transit where our driver parked and said he would continued the journey tomorrow, for those going to Awka and Enugu. But my spirit didn’t allow me to sleep there inside the bus, considering that my destination is now close.

“So, when I came out and didn’t see bus going to Awkuzu, someone told me to get to the Tarzan Junction first with shuttle or Keke, which I did. So when I alighted at Tarzan, and was now trekking up to wait for bus by the road side, this people called me. I initially didn’t want to go, but seeing that they’re security men in uniform and with guns, I went, still in fear anyway.”

Continuing, she said: “When I reached, they asked me who I was, where I was coming from, where I was going to, what I do for a living, and what I was carrying in my bag. I didn’t know which one to start answering from. As I wanted to start talking, they commanded me to come out of the road and follow them into a nearby dark open shop by the roadside.

“As fear enveloped more, they snatched my bag and carried it into that place, and ordered me to come there. When I reached there, they asked me who owned the two Android phones I was holding. As I wanted to talk, they snatched the two phones from me, and told me to bring the receipts of the phones.

“In all these things, I had never said a single word. They told me not to waste their time; and also started searching my bag, where they found N7,500 and immediately took. They now gave me three options of either providing the receipts of my two Android phones immediately, or forfeiting the phones, or forfeiting my money.

“Before I was even trying to say a word, they gave me my phones and N500, told me to carry my bag, and then they went away with my N7,000, and ordered me to vacate the area immediately and enter a shuttle bus which fortunately stopped there to pick a passenger.”

“My dear, that was how I lost my N7,000 oo. This kind of thing had never happened to me before. Security people for that matter,” she lamented, adding that the driver and some other passengers in that shuttle bus told her to even count herself lucky that they even returned her phones to her and did not even rape her on gun point, noting that the security people had long turned the area to a danger zone, after she narrated what happened to her.

The victim, who shared this experience yesterday night (Friday) in a bus was corroborating a story earlier narrated by a co-passenger in that bus, who said he was similarly robbed that night (yesterday) at the same Tarzan Junction by the same vigilante operatives.

The yesterday victim, whom the bus picked a bit faraway from the Tarzan Junction where he was waiting for Awka bus, said the security people ordered him to go there and wait for bus after they had robbed him of N13,700 and gave him some ‘hot slaps’, for failing to provide the receipt of his over-ten-year-old laptop that they found while searching his traveling bag.

He said they returned his laptop to him, gave him the hot slap on top, hit him with the base of a gun (isi égbè), and kicked him out of the same dark open shop when he attempted to pester them to return his money.

In a similar development, a driver of the Eastern Mass Transit, was also seen in Awka that same night (yesterday), lamenting that he and some of the few passengers he picked along the road while returning from Onitsha to Awka on a personal trip, were also robbed of their phones and money in Onitsha that same night, by a group of young boys who double-crossed him with two motorcycles after he slowed down and picked a stranded passenger.

He said the boys, who might be part of the criminals terrorizing Onitsha for years, had pistols with them, which they used to terrorize and rob them.

The driver, who had a distended lips, further said the boys also repeatedly punched and hit him with their pistol and tore his clothes when he initially refused to release his phone on their request.

When contacted, the Police Public Relations Officer of the Anambra State Police Command, DSP Ikenga Tochukwu promised to forward the report to the DPO of the area, and assured of further details and investigation.