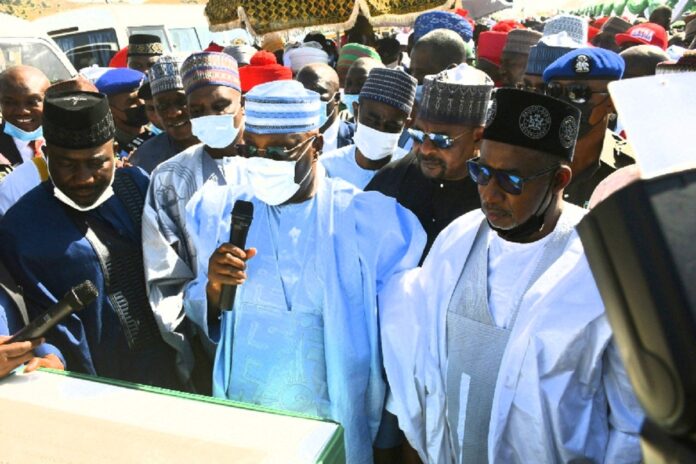 The road which was named after the former Vice president (Atiku Abubakar road) was one of the roads awarded for construction in 2019.

Speaking at the commissioning ceremony Alhaji Atiku Abubakar described governor Bala Mohammed as a construction Governor of the year.

Former Vice President called on Government at all levels to prioritize provision of physical infructure to enhance job creation and economic empowerment.

He said the country needs extra commitments in eradicating the wave of unemployment and insecurity gor that embarking on massive infrastructural development project is the instrumentl for achieving economic prosperity.

while commending the Governor for constructing the road, Atiku urged the governor to consolidate on his zeal towards impacting positively on the lives of the people.

He said he was fascinated seeing the ongoing and completed projects which according to him will improve socio economic development.

Atiku said that the Bala Mohammed led administration is poised to improving the livelihood of citizens.

He commended the governor for his patriotism abd commitment to the well being of the people, and urged the people of the state to continue to give the governor all the needed support to succeed.

Atiku said that states controlled by the Peoples Democratic Party (PDP) are doing excellently well as evident by the commissioning of projects in those states compared to the All Progressives Congress (APC) states, and called on the federal government to learn from the PDP states.

“Let me start by commending you, because you have done very, very excellently well. For the few hours I have been in Bauchi today, I have been impressed by the infrastructural developments that I have personally seen not been told With these infrastructural developments, which range from roads, to housing, to primary health clinics, to the renovation loan of our schools for the education of our young ones”

“These programmes that you have implemented and continue to implement, are the bedrock of development be it educational, health care delivery or any other aspects of development. But, most importantly, these developmental projects have become instruments of economic empowerment.”

“By economic empowerment, they have also created thousands of jobs for our teeming youths. Let me commend you for reducing the unemployment in the state and the country at large because it is this unemployment that creates security challenges that we are currently facing in this country,” he said.

He said that: “I wish the federal government will copy what the PDP governors and PDP states are doing in this country, because in every PDP state you go, you will find infrastructural development projects taking place.

“I cannot recall any APC states that are commissioning any projects. Therefore, your Excellency, you are virtually laying the pathway to the return of PDP in this state and in the country at large. I want to commend your contributions in that regard.”

On his part Governor Bala Mohammed, Abdulkadir said that the road project which was conceived and executed by his administration was in fulfilment of his campaign promises to the people.

He named the road as: “Alhaji Atiku Abubakar Road.”

He said: “We are here to commission the long-awaited commissioning of the 4.4 kilometers Gombe-Maiduguri road by-pass in Bauchi metropolis. This is a very strategic road by many respects, first, like every other road, it will promote economic activities that will improve the likelihood of the people.

“Second, the physical development will enhance the aesthetic beauty of the state capital hence, moving us closer to achieving lofty the environmental plan we envisioned for modern Bauchi city.

“Bauchi city metropolis has remained without a bypass on the eastern axis to decongest the traffic caused by the movement of heavy trucks into the city center and the central business areas with the attendant hazards and hardships. I am glad to say that this road was conceived and constructed to achieve this noble objective.”

He said that when he came into office in 2019, he made a lot of promises based on the developmental roadmap tagged: “My Bauchi Project” which laid out his ambitious plan to take Bauchi State from the back quarters of development to the front seat of human progress.

Governor Bala told the former leader that his administration mandate is to fast track development, improve living conditions by opening up the city centre.

The road according to him was to decongest the town and reduce traffic caused by heavy trucks.

Governor Bala said the project was inline with the urban and rural renewal projects initiated by his administration.

He said, Over thirty strategic roads were so far completed in addition to provision of basic infrastructure in critical areas.

He said despite the dwindling revenue to all levels of government, we have moved steadily to redeem every promise, redeem every pledge and honour every commitment. We do so because we don’t take the confidence reposed in us by the people for granted that a government’s words should be a bond that public office is a trust that should be held with the highest form of responsibility,”

Earlier, in his welcome address, the Commissioner of Works and Transport, Abdulkadir Ibrahim, said that the road was constructed to ease the transportation difficulty in the state.

He said: “It is to make the state capital and other towns more accessible to ensure the free flow of goods and services to bring development in our satellite towns and drainages across the city centers to transform our dear state”.

Abdulkadir said “Governor Bala is determined and committed in changing the old narratives of the state in providing, improving and increasing access roads and other basic amenities to the state and within the metropolitan cities and to the poor and vulnerable.”

“This road was a virgin land with rocks and streams but with the determination of the executive governor in bridging the deficit of infrastructural development he met in the state, this made him look into every nook and cranny of the state and that is why we are here today to commission this road.”

He said the ministry intensified monitoring and evaluation to ensure the project meets the construct specification.

The former Vice President had earlier paid a homage to Emir of Bauchi Alhaji Rilwani Suleiman Adamu in his palace, where he was received by the members of the state tradoonal council of emirs.
The occasion coincided with birthday of Atiku at 75 years where a birthday was cutst the commissioning ceremony.