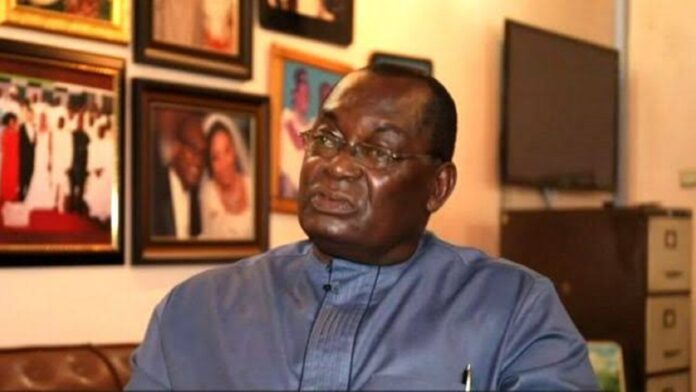 Dr Chike Akunyili, the husband of the late Director-General of the National Agency for Food and Drug Administration and Control, Prof Dora Akunyili, was on Thursday buried at his Agulu home in the Anaocha Local Government Area of Anambra state.

Akunyili was killed on 29th September while returning to Enugu from an event in Onitsha, Anambra State where his late wife was given a posthumous award.

The gunmen who killed him and eight Others at Nkpor in the Idemili North Local Government Area of the state were reportedly shouting “No election in Anambra on November 6.”

Speaking at his burial service at Madonna Catholic Church, Agulu, on Thursday, Reverend Father Damian Akunonu said there was no justification for the killing of Chike.

He said the loss of core values was responsible for the growing rascality and criminality in society, adding that the murder of Akunyili should serve as a wakeup call to both the state and federal government to restructure the security architecture of the country.

Rev Akunonu of the Biggard Seminary, Enugu, who said he wedded the Akunyilis, maintained that the couple were fulfilled persons.

He said, “Unfortunately, the place where Chike was killed had four police stations and the same number of hospitals, yet Chike was not saved. People were rather busy recording video of the incident.

Chike was seen in a video clip struggling to save himself after the attack.

“Those in charged of security at both federal and state levels should use this opportunity to restructure the security architecture.

Speaking, one of his children, Obum Akunyili, said though his father’s death was painful, he( late Chike) was a fulfilled man whose children were doing great in the various areas of their calling.

He said family friends, relations and well wishers from Canada, United States and other countries attended the burial ceremony.

Amongst those who attended the burial service were a former governor of Anambra state, Peter Obi and his wife, Margret; a former National Chairman of the All Progressives Grand Alliance, Sen. Victor Umeh; the Anambra state deputy governor-elect, Dr Onyekachi Ibezim; representatives of the Ohanaeze Ndigbo , five Catholic bishops and scores of other priests.