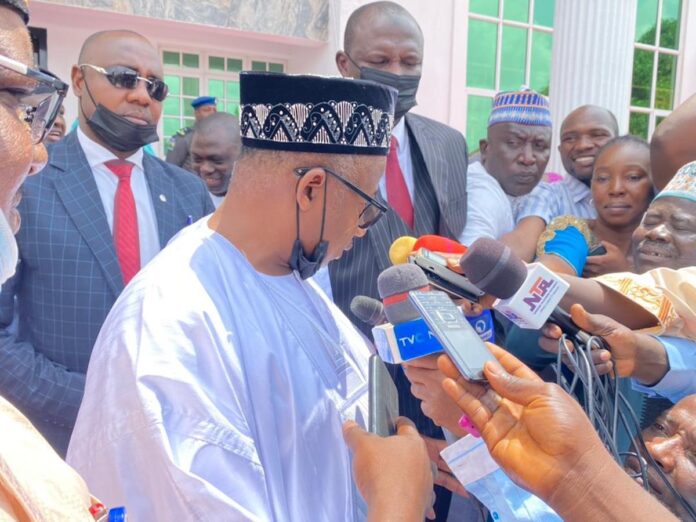 See the Press Statement below:

We observed the defection by Chief Femi Fani Kayode (FFK) from PDP to APC  yesterday with little or no surprise.

We strongly believed that this is the time and season for defections. It is our  belief that whenever someone defects, it is obvious that he or she is pursuing something or something is pursuing him or her.

While we remain aloof, tacit and obstetric to his claims that God told him to defect  to APC and how he influenced Governors Umahi, Ayade and Matawalle’s defection,  we take seriously with unassuming exception, his claim that Governors Ifeanyi  Unwuanyi, Bala Mohammed and Sayi Makinde are on their way to APC through his  influence.

We are odiously convinced that FFK has the right to use his only and available  political weapon and value which is his tongue, we make bold to say that FFK as

we know him, has made a lunatic and vain claim to placate and please his  Taskmasters and Paymasters.

We are not surprised with this claim because former President Obasanjo said it on  the 30th of August, 2018 when we visited him and I quote ‘”Fani Kayode is my boy,  give him food, he will praise and sing for you. (Check Punch Newspaper 31st August 2018). We sincerely believed and truly too, that this is part of his praise  singing which he is known for.

We want to state clearly without mincing words that Senator Bala Mohammed  has not and will never defect to APC and also, he has never at anytime discussed the issue of defection with FFK. Senator Bala Mohammed is a Nationalist who  always placed the National interest above his personal interest. He has and still  passing through persecutions, humiliations, prosecutions, character  assignations, campaigns of calumny, frustrations, insults and even spiritual  attacks. In all these, God has given him the grace to remain steadfast, focused  and committed to his ideals which he always defines. Therefore, there is no  number of forces which he has not encountered that are pursuing him which  would make him to defect to APC.

It is a general and public knowledge that our Nation is sinking and there is  every need for Patriots and Advanced Citizens to come together to rescue the  Nation. Bala Mohammed by acts of commission or omission, has proved to us  that he will be part and parcel of the Rescue Mission. No doubt with people like  Bala Mohamed in the boat, Nigeria and Nigerians will be rescued in 2023 from  the National conspiracy by the few elites which FFK is a prominent member by  his actions, words and deeds.

It is a good political development that the Southern Governors are now speaking  collectively irrespective of political leanings. The call by these Governors is a  welcome development but it does not reflect the reality on ground.

It is our strong belief and candid opinion that Nigeria needs a bold and  courageous Northerner who will take the bull by the horn and tackle the  security challenges which is our major national challenge for now even if it  means killing the trouble makers if possible, so as to bring desired peace.

We sincerely appreciate the position of the Southern Governors but we are quick to  say that it is not the best option for now.

We are highly impressed by the infrastructural developments in Adamawa State. We  observed with great disbelief that such a feat could be achieved in just two years in  Adamawa State that is not part of the oil producing States. We sincerely commend  Governor Ahmadu Fintiri and his team.

In view of this thereof, we want to assure him that NYLF will do whatever is possible  within the confines and ambit of the law, to ensure that he comes back in 2023 to  continue with his good works.

To this end, we wish to appeal to other parties in Adamawa State to collapse  their structures, support and vote for Fintiri during the Gubernatorial elections  come 2023.

In conclusion, we want to assure Nigerians that come 2023, we will have a President  that will be referred to as Nigeria’s President of Nigeria’s extraction not Northern or  Southern extraction.

We should not be distracted, discouraged or despair because of people that are  identifying with or Conspirators because of a pot of porridge. We will surely sing  hallelujah in 2023 by his grace.

That you all and God bless you.