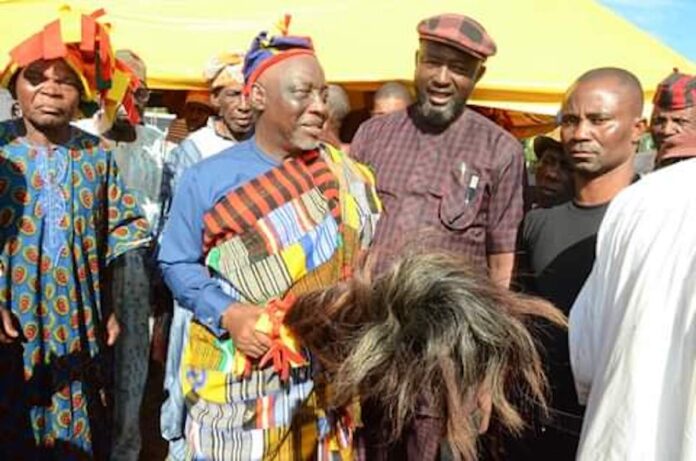 The Senator representing Benue South Senatorial District, Abba Patrick Moro, on Thursday, celebrated the Ere-Ononu (New Yam Festival) with the people of Ekile community, in Ado, one of the Local Government Areas in his Constituency.

In his welcome address, the Ado Council Chairman, Hon. James Oche, said Senator Moro has proved to be a father and leader who loves his Constituents dearly.

Oche commended the Senator for suspending all his activities in Abuja to come and celebrate with them, saying it showed how much he cared about them.
The council boss assured Moro of their continued support for him at all times.

The Chairman, organizing committee of the event, Hon. Andrew Ugbala, and the traditional chiefs of the community, in their separate speeches, appreciated the Senator for making out time out of his busy schedule to be with them. They said they had never been visited by a Senator before, noting that the visit would go down in history as the first time the community hosted a serving Senator.

They applauded Moro for all that he has been doing for Benue South, and prayed God to continue to keep and preserve him to do more for them.

In his response, Senator Moro thanked the people for hosting him and their support over the years. He charged them to live in unity and always guard against external aggressors.

He promised to construct a motorable road for the community and also work hard to ensure that electricity gets to them.

In appreciation for the visit and his numerous achievements, the community conferred on the Senator the title of OKPLA EKILE.