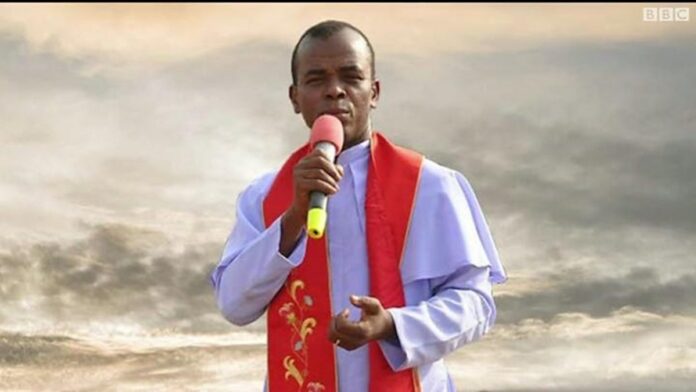 On Wednesday, May 5, 2021, the fake news broke that Rev. Fr. Camillus Ejike Mbaka was missing. The storyline was that Mbaka was invited by Bishop Calistus Onaga, Bishop of the Catholic Diocese of Enugu. There have been concerns that Mbaka had strayed too far away from his priestly calling and deep into the political arena. These concerns are not new, but Mbaka’s confession that the Bishop invited him over Nnamdi Kanu lends credence to them. The Presidency recently said that some people were recruiting the leadership of some ethnic groups, politicians and religious leaders around the country to forcefully remove President Muhammadu Buhari from office. Earlier, the DSS alerted the country of similar moves.

Mbaka recently turned heel, calling on the President to resign or be impeached. He also lent his voice to the Indigenous People of Biafra (IPOB), blessing their leader, Mazi Nnamdi Kanu. The Presidency responded, accusing him of turning heel because he did not get the contracts he requested. This led to further outbursts from Mbaka. In the course of the events, the Bishop intervened and invited Mbaka over for a talk. It was therefore shocking to read from Mbaka’s Adoration people that he had been missing. They mobilized thousands of his followers from across Enugu State for a mob-hunt of the cleric, vandalizing the Bishop’s Court and desecrating the Church.

Radical Catholicism did not begin with Mbaka. We have had the likes of late Father Steven Njoku, the Spiritual Director of the Upper Room Ministry, Emene, Enugu. We have also had Father Ike Obi who reigned in Onitsha and was renowned for his Tuesday prayers. In Abia State, we had Father Ifeanyi Anozie. He was notorious for administering the sacrament to little children who had not attended catechism and not reached the age which the Canon Law stipulates for communicants. He argued that the body of Christ should be received by all. He was excommunicated and got married.

In the early ‘80s and late ‘90s, we had Rev. Fr. Emmanuel M.P. Edeh, a member of the CSSp Congregation. We also have the likes of Father Ebubemuonso in Onitsha, Father E-dey Work in Ahaiara, Mbaise, Imo State; Father Munfort Okah Nwikpo in Orlu, and Father Bede Idimogu at St. Joseph’s Catholic Parish, Umuna, Orlu. In Benue State, there was one Father Alia who had his own ministry in the Makurdi Diocese. Beyond the Nigerian shores, we have had radical Catholic priests like Emmanuel Milingo, born on June 13, 1930. At 39, Milingo was consecrated by Pope Paul VI as the Archbishop of the Archdiocese of Lusaka in 1969.  By 1983, he stepped down from his position as the Archbishop of Lusaka after criticism trailed his exorcism and faith healing practices. In 2001, aged 71, Milingo got married and received a marriage blessing from Sun Myung Moon who was the leader of the Unification Church. In July 2006, he established what he called the Married Priests Now, an advocacy group that promotes the acceptance of married priests in the Catholic Church. On September 24, 2006, Milingo consecrated four men as Bishops without a papal mandate, incurring a latae sententiae excommunication, which was announced by the Holy See Press Office two days later. On December 17, 2009, the Holy See Press Office announced that Milingo was no longer a Catholic priest. He retired from the Married Priests Now organization in March 2013 and appointed Peter Paul Brenam as his successor.

Mbaka seems to be on a different plane. He frolicks and quarrels with politicians. Ordained on July 29, 1995, he established the Word Prayer Centre of the Eucharistic Jesus, few years after. The ministry is now known as the Adoration Ministry Enugu Nigeria (AMEN). During a prayer session at the GTC, Enugu, an accident occurred that took the lives of 14 worshipers. Mbaka fumed and accused his friend, Senator Chimaroke Nnamani, who was Governor of Enugu State at the time, of attacking his ministry and causing the death of his followers. He prophesied that Chimaroke was going to die and would not win his reelection. None of that ever happened as Chimaroke was reelected in 2003, went on to win his senatorial election from detention years after.

Mbaka continued predicting election outcomes and mounting campaigns of calumny against politicians. In 2010, he released an album targeting Dr. Ikedi Ohakim who was the Governor of Imo State. Ohakim was accused of beating a Reverend Father. Mbaka mounted the pulpit, badmouthed Ohakim and released an album where he sang that the man who beat a Reverend Father would not be Governor anymore. His music became political campaign tool. Ohakim lost his re-election bid and Mbaka was mentioned as one of the factors.

During a Sunday service at the Adoration Ground, Enugu, on Sunday, August 3, 2014, Mbaka recanted. He said: “It is regrettable that, at last, the truth has manifested, though not at the right time. Ohakim didn’t beat any priest. It was an orchestrated falsehood and blackmail which unfortunately were aimed at scuttling his re-election bid. When we wanted to reach the Governor so as to get his own version, those who worked with him made it impossible. It was then we composed our music: Onye ahu kuru Father ihe, ogaghi achi anyi ozo”, meaning the person who beat our priest will not rule us again. Mbaka is also badmouthing Governor Hope Uzodimma for not picking his calls, not coming for thanksgiving and not taking advice from him.

Some people now dress Mbaka in tribal cassock, whereas he is a priest of the Catholic Church, not an Igbo priest; same way Bishop Onaga is not a Benue priest. The Catholic Church is one big family-church, The Mother Church. Mbaka was not called into the priesthood to defend the Igbo interest but to do Kingdom work. In doing so he must follow the footsteps of his Master, Jesus Christ, who never meddled with the political class. When asked whether it was proper to pay tax, Jesus Christ responded: “Therefore, render to Caesar the things that are Caesar’s, and to God the things that are God’s”, Matthew 22:20-21. On another occasion, Jesus said to Pontus Pilate, a political leader at the time: “My kingdom is not of this world. If my kingdom were of this world, my servants would have been fighting, that I might not be delivered over to the Jews. But my kingdom is not from the world”, John 18:36.

Christians are constantly admonished to obey earthly leaders and pray for them. The Bible says God allowed the earthly kingdoms for a purpose. “Let every person be subject to the governing authorities. For there is no authority except from God, and those that exist have been instituted by God”, Romans 13:1-5. In Hebrews 13:17, we also read: “Obey your leaders and submit to them, for they are keeping watch over your souls, as those who will have to give an account”. Several other Bible passages dwell generously on this issue, particularly Titus 3:1 where Apostle Paul asked Brother Titus to “Remind [us] to be submissive to rulers and authorities [and] to be obedient”.

It is worrisome that Mbaka, upon his return from the Bishop’s residence on Wednesday showed no remorse but rather took to inciting his followers. Mbaka does not realize that he is a property of the Church. The day he was consecrated and took the Oath of Allegiance to the Catholic Church was the very day he surrendered himself as the property of the Church. It amounts to sheer rascality and arrogance for Mbaka to claim that nobody owns his mouth. Mbaka’s body – from hair to toe, belongs to the Catholic Church. He misinformed his followers about essential thing as who owns the priest. No wonder his followers did not also know that the safest place Mbaka could be is the Bishop’s house. His followers did not know that the Church owns him. They believe he owns himself, or that they own him, and therefore the Bishop had no right to invite him or keep him longer than they wanted.

The Mbaka episode teaches so many lessons. It exposes the level of ignorance, impatience, brigandage, radicalism and hypocrisy in the country. Where is the fear of God if we can go on and destroy the things of God because a servant of the same God was kept in the facility against our wish? The Mbaka saga reminds us that it is time we started looking at the kind of people our religious leaders are raising in the churches and mosques. Religious centers should be dedicated to raising godly people. Christians should be taught to cultivate the fruits of the Holy Spirit.

Mbaka may have succeeded in raising his own army. If they were children of God, they would have known that having been consecrated, a priest like Mbaka could suffer harm, could die, even imprisoned. In all of this, the priest and his followers count it all joy when men persecute them for the sake of the gospel of Christ. The apostles that laid the foundation suffered shame, imprisonment and even death. In all, they counted it as joy. We should do likewise if we were children of the same God.