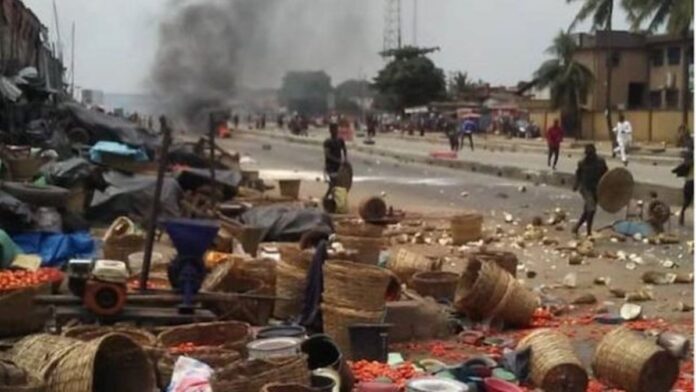 The present insecurity in the country may have reached a crescendo where it may be too late to remedy. This is as the nation finds herself grappling with endless violence and killings at virtually all the geopolitical regions of the country.

Information reaching 247ureports.com from sources in Abuja reveal that a community in Abuja – Kubwa [along Arab road] recently underwent what could be best described as an attack by “Hausa boys”. According to the police at the Federal Capital Territory [FCT], the incident occurred on Thursday May 6.

In the video recording obtained by this medium, youths, believed to be northern youths, could be seen looting the properties belonging to Kubwa resident in a brazen broad daylight robbery without fear. The video shows the youths carting away generator sets and chairs and other valuables. The owners of the properties were left helpless crying out for assistance. A lady’s voice could be heard crying for help.

There was no police presence.

The attention of the FCT Police Command has been drawn to the viral video of looting in the social media, suggesting that the ‘’Hausas were looting Southerners at Arab Road, Kubwa-Abuja’’.

2. On the contrary, preliminary investigation reveals that, *the Development Control of the Federal Capital Territory earlier conducted a demolition exercise on Thursday 6th May,2021 at Arab Road, Kubwa, however, some yet to be identified residents seized the opportunity to loot items from the demolition sites. Nonetheless, Police Operatives from Kubwa Division swiftly moved to the scene upon receiving the information to restore calm within the Area and arrest the suspects.*

3. *Consequently, the Commissioner of Police CP. Bala Ciroma has ordered a discreet investigation into the incident and appeals to residents to remain calm and* law-abiding.

For: The Commissioner of Police