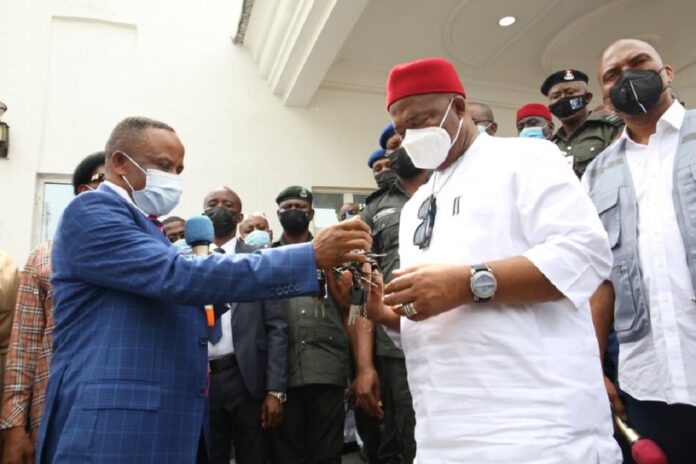 Governor Hope Uzodinma of Imo State has appealed to the Niger Delta stakeholders to de-emphasise politics and give room for the Niger Delta Development Commission (NDDC) to work for the development of Nigeria’s oil-rich region.

Governor Uzodinma spoke on Tuesday during a courtesy visit by the NDDC Interim Administrator, Mr. Efiong Akwa, and his team of directors at the Imo State Government House, Owerri.

He lamented that in the years past, politics had hampered the speed of work by the NDDC, and urged Niger Deltans not to allow politics and sentiments to slow down the work of Commission.

Governor Uzodimma said: “The time for politics is over. This is a time for governance.”

The governor lauded President Muhammadu Buhari and the Minister of Niger Delta Affairs, Senator Godswill Akpabio on the choice of Akwa as the NDDC Interim Administrator pending the composition of a new board for the Commission.

Governor Uzodimma observed that the NDDC is an interventionist agency, only established to fast-track development of the oil-producing region of the country.

“NDDC is not an ethnic or tribal organization,” the governor explained and warned those trying to portray it in that light to stop forthwith.

Governor Uzodimma said it was regrettable that some young people from the region were being sponsored to protest against the activities of the NDDC, and appealed to them to stop and allow peace to reign “because development could only take place in an atmosphere of peace.”

Governor Uzodimma noted that Imo State was in dire need of NDDC’s intervention in quality roads infrastructure, educational sector, especially the tertiary institutions, health sector, and also on provision of sufficient palliatives. He specifically implored the NDDC to furnish the hostel it built for the state university so that students could use the facility in comfort and safety, particularly now that the COVID-19 pandemic is wreaking havoc nationwide.

Governor Uzodimma added: “No need of building many roads that will not last for one year before they go bad. Imo State has had its fair share of broken down infrastructure. But I think it is high time the NDDC provide infrastructure based on need assessment of the people. Compulsory needs assessment by NDDC is important if want want value for money.”

Earlier, the NDDC Chief Executive Officer told the governor that the Interim Management was meeting with important stakeholders of the Niger Delta region as directed by President Buhari. “This is important, because partnership is key to development,” Akwa said.

“That was the spirit in fashioning a Master Plan for the Niger Delta, the vision of our shared allegiance to this great region. After so many years of neglect, it is important that, together, we do far more for our people. It is important that we do more for a region which has provided the bulk of Nigeria’s wealth, and accounted for our rise in the comity of nations.”

Akwa commended the Governor Uzodimma for embarking on many projects which were helping to open up areas with rich agricultural potential. “You are helping to boost the economy of these areas and helping to improve the living conditions of the people. We are here to learn from you,” he said.

The NDDC boss harped on the importance of energising the Commission’s Presidential Advisory Council, comprising the state governors in the nine Niger Delta states.“The past practice where the Commission undertook projects and programmes in the states, without first building a working coalition with the states governments, to integrate our plans, policies, projects and programmes into the state government’s overall master plan, will no longer hold,” he noted.

Akwa said that the courtesy visit was both to acknowledge the governor’s strategic importance to Niger Delta development, as well as to seek ways in which to forge a stronger alliance with the government and people of Imo State.

He explained further: “We are determined to continue to make a difference in the Niger Delta region in general, and in Imo State, in particular. We remain committed to providing projects and programmes of enduring quality. To build the Niger Delta is to build ourselves. To make it a better place is to give our people a better place.”

Akwa and his team later handed over keys to four waste disposal trucks to the Imo State Government to assist the government in her efforts at waste disposal to improve the sanitary conditions of the cities in the state.