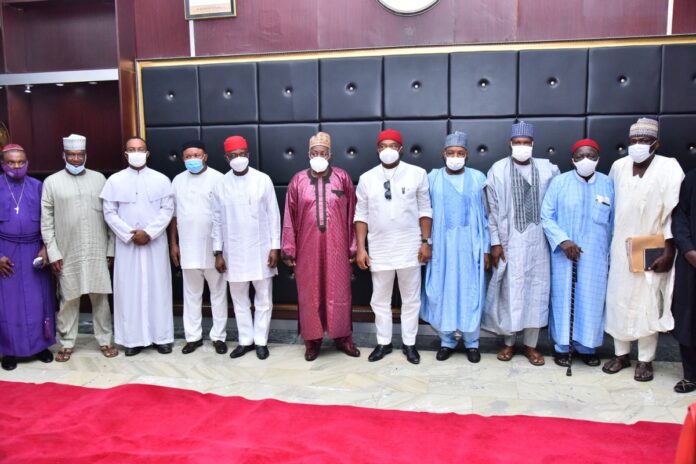 Determined to ensure that a harmonious relationship exits between ethnic nationalities wherever they reside in the country, Governor Hope Uzodimma of Imo State has initiated a peace accord meeting between Christians and Muslims, particularly farmers and herdsmen in the South East zone.

He has therefore convened an interactive meeting for the purpose of fostering harmonious relationships between the Groups at the Executive Council Chamber, Government House Owerri, where the  Governors of Jigawa and Kebbi states, Muhammadu Abubakar and Atiku Baguda respectively were in attendance.

Also present were the Chairmen of Christian Association of Nigeria (CAN) from the South East zone, Chief Imams from the zone, Leaders of  Miyetti Allah from the five South East States, President General of Ohanaeze Ndigbo and  heads of Religious and Traditional institutions.

Addressing the audience, Governor Uzodimma harped on the need for sustainable harmonious and peaceful relationship between all tribes, irrespective of religious beliefs or political inclination.

Governor Uzodimma lamented  the current security challenges in the nation which he said were being instigated by peddlers of rumours and false information, to encourage conflicts between farmers and herders, stressing that “the two groups should complement each other because they need  each other to succeed in their businesses.”

The Governors of Kebbi and Jigawa states, in their remarks appreciated Governor Uzodimma’s wisdom in convening the meeting, and acknowledged that all Nigerians have the right to live peacefully in any part of the nation, under the protection of the leadership of the state governments.

They advised that all criminals inhabiting in the forests should be flushed out both in the Northern and Southernor parts of the country and be prosecuted.

Representatives of the Christian, Muslim, Traditional institutions, and Miyetti Allah who spoke, advocated the need for sustainable harmonious relationships among all ethnic groups in Nigeria.

At the end of the meeting a communique was issued where a harmonious,  peaceful relationship that will foster a united  Nigeria was agreed by all concerned.