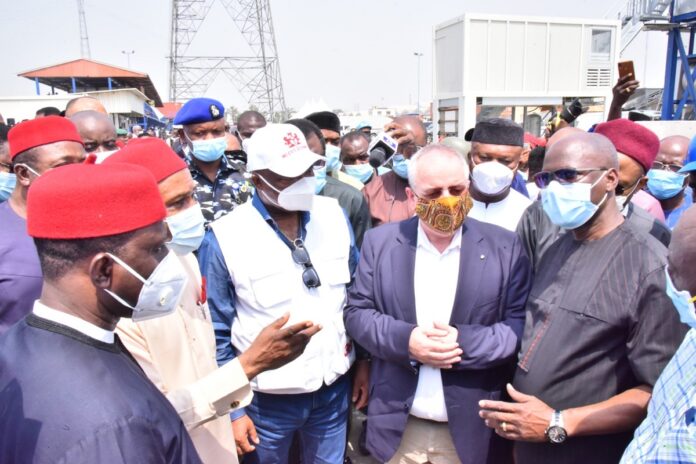 The South East All Progressives Congress Party (APC) leaders led by Governor Hope Uzodimma of Imo State have expressed their immeasurable gratitude to President Muhammadu Buhari for the massive infrastructural development embarked upon by the Federal Government in the region,  especially the second Niger Bridge currently under construction.

At a parley on Friday at the site of the second Niger Bridge in Onitsha convened Governor Uzodimma, the leaders took turn to salute the courage of President Buhari over the ambitious projects.

Governor Uzodimma said that the APC leadership in the South East resolved to come as a team to inspect and take ownership of the flagship project estimated at Three Hundred and Sixty Six Billion Naira (N360billion) that will link the South East, the South South and the entire Northern Nigeria when completed.

Governor Uzodimma said: “What looked like a dream is a now a reality as the second Niger Bridge has a lot of economic and human benefits to both South East and Nigeria in general.”

The Governor who painted a picture of countries whose history cannot be written without mention of a particular leader said “at the completion and commissioning of the second Niger Bridge the name of Buhari will be immortalized.”

Governor Uzodimma advised that the South East must come together and understand that the world has no place again for criminality, blackmail and pull-him-down syndrome, noting that “whatever diplomacy cannot get for Ndigbo now, war will not get it for them”.

He therefore commended the leadership of the ruling party, the APC at the State and National level for their commitment and involvement in ensuring the success of the gigantic project.

In their various remarks, the Minister of Science and Technology, Dr. Ogbonnaya Onu fervently thanked the President for his magnanimity to the South East and described the second Niger bridge “as a promise made and promise kept”.

He emphasized that keeping of promise by any government is one of the indices with which such a government is measured and trusted.

The Minister for States Mines and Solid Minerals,  Dr. Sampson Uchechukwu Ogah described the second Niger Bridge as “one of the best things happening to the South East.”

In his remarks, Anambra APC leader, Senator Andy Uba thanked the President for the project and expressed happiness that “the second Niger Bridge is a boost to APC in the South East and Anambra State in particular.”

The Minister for State Education, Dr. Chukwuemeka Nwajiuba described the project as “a show of great love by  President Muhammadu Buhari to the South East” and that “the importance of the project is shown on its funding as the project is financed from the presidential initiative funds which is outside the regular budget of the Federal Government of Nigeria”.

Contributing, the former Governor of Imo State, Chief Ikedi Ohakim said they have come to see and have believed the reality of the project and “it is the responsibility of the South East leaders to tell our people that the second Niger Bridge is a reality.”

On behalf of the APC Youths in the South East, the Deputy Speaker Imo State House of Assembly,  Rt. Hon. Amara Iwuanyawu said “the youths have come, seen and believed and the only way they will express their gratitude will be to mobilize the youths to join APC by participating in the nationwide registration and revalidation of APC going on now.”

Receiving the Governor and the leaders earlier,  the Federal Controller of Works Anambra State,  Engr. Ajani explained that the bridge is about 47 kilometers and that the first phase which has reached 55 per cent completion is about 11 kilometers “and generally the project has engaged close to 20,000 workers.”

Highlight of the visit was the inspection of the Bridge by the Governor and his entourage.