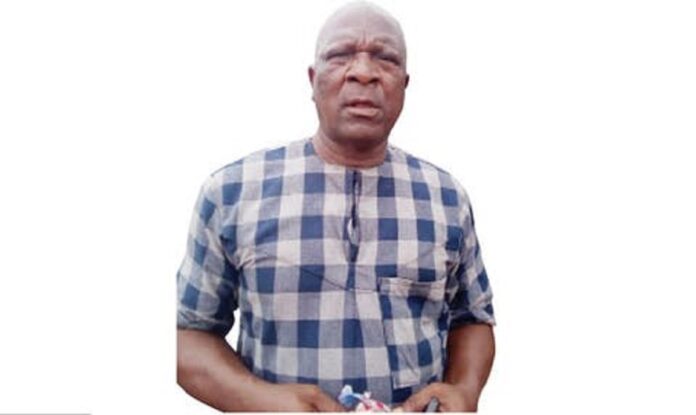 Mr Andy Ugwu, father of late Augustine, a 27-year-old Law student of Nnamdi Azikiwe University, killed and buried in shallow grave by some policemen in Enugu, has petitioned against an Assistant Commissioner of Police, Fidelis Ogarabe for aiding the escape of those accused of killing his son.

The petition which our correspondent sighted on Wednesday, was addressed to the Chairman, Police Service Commission and copied the Inspector General of Police, Mohammed Adamu.

He alleged that Ogarabe, 2i/C State CID Enugu State, has turned the State CID Enugu as part of his personal property, adding that he has spent 25years in the said office. “He was posted there as a cardet ASP and rose to the Rank of ACP without a change.”

Ugwu, who is a retired Police Officer, noted that ACP Ogarabe is currently, supervising the office of Police Anti-Cult and SARS in Enugu. “He served as CSO to the former Governor Sullivan Chime for eight years and still CSO to the current Governor, Ifeanyi Ugwuanyi.”

The petition partly read: “Is he alone competent to occupy such viable and sensitive position, if not for corruption? What is special in him? Was he enlisted into the force to serve a particular office?

“The most painful aspect of his action and in actions, is that he compounded cases to the whims of the highest bider. Was state CID created for him alone? Let Police Service Commission and other relevant authorities intervene before more damages are done to the system.

“On the 23/04/2020 between the hour of 10-11am my late son Augustine Ugwu, 27 years, a final year law student of Unizik, Awka was arrested by one Oliver Ozioko and seven other thugs of the then, late Chairman of Nsukka local government, Patrick Omeje to deal and suppress his opponent.

“After torturing my son, they handed him to DSP Ochin, Officer-in-Charge of Nsukka Police Anti-Cult unit. Ochin and his men killed and buried him in shallow grave for no offense.”

He added, “The Police Act and other laws of the land does not permit extra-judicial killing of a suspect even if he is caught red handed in the act. The killing of my son violates section 33 of the 1999 constitution of the Federal Republic of Nigeria.

“This singular act has also subjected me and my family to psychological and emotional trauma and torture in violation of my right and dignity as guaranteed in section 34 of the 1999 constitution.

“The same act amount to murder in violation of relevant sections of criminal code Law of Enugu State. My son was brutally assaulted to the point of half death before the late chairman’s thugs handed him to DSP Ochin and his operatives instantly terminated his life without statement recorded from him.

“When my family raised alarm over the circumstance that led to the death of their son, ACP Ogarabe instigated DSP Ochin to raise a false signal and tag my late son as a suspected cult and armed robber.”

Grieving Ugwu, further alleged that ACP Ogarabe wanted to use his position to cover up the murder case against his operatives, before he petitioned IGP, who graciously dispatch detectives from Force CID Abuja to take over the case from the state CID where those involved were serving.

He continued: “Truth of the case emerge as DSP Ochin later confessed to the crime. My late Son was found where they buried him in shallow grave on the 22/06/2020.

“When detectives from Abuja wanted to move suspects to Abuja on the 26/06/2020, he prevented them due to his influence and power behind him.

“Again on 13/11/2020, the detectives from Abuja arrived Enugu and demanded for the suspects, but he (Ogarabe) again, facilitated their escape from his custody.

“All efforts made by the detectives to re-arrest them proved abortive.”

Ugwu, however, stated that  upon the turning of events, as a retired police officer, he made an inquires, which revealed that DSP Ochin and his team had killed about 50 innocent souls in the past which earned him, the name “Odogwu” within the police cycle. “He also sells part of human being for money making.

“He (Ochin) operates as if he has license for killing. Facts finding also reviewed another DSP Ekeleme O/C Ant-Cult Enugu unit perform similar act. Their names are often mentioned before the ongoing panel set up for police brutality nationwide.”

The father of the slain Law student recalled, “it is also on record that immediately detective from Abuja left Enugu on 26/06/2020 he (Ogarabe) arranged with one Insp. Onugu Okpo who stormed the house of my principal witness Mr. Emeka Ogbu, whose shop my son was arrested and later killed.

“He testified before IGP, panel and for that he was arrested for an offence yet to be disclosed. They brutalise and detain him at SARS office. After a package payment of three hundred thousand Naira (N300,000) he regained his freedom. After one week interval, he was re-arrested and detained at Anti-Cult office for period of two months. He was charged to court after the intervention of Amnesty International and was subsequently, reminded in prison custody for a week before Enugu High Court  discharged and acquitted him.”

Mr Ugwu, however prayer the Police Commission and IGP Adamu, to ensure that those involved in the murder of his son were brought to justice.

In his reaction, ACP Ogarabe, who spoke to our correspondent on telephone denied the accusations, describing it as nonsense.

He asked “through which way am I aiding and abetting? My father died and as I speak to you I am burying my father. Where are they being shade, me or the CP or DC. This case has been transferred to Abuja.

“The man is an idiot. I don’t know where I am shading someone on uniform who committed an offence. Those people are uniform and whatever thing one committed he takes responsibility. How does it concerns me,” he submitted.