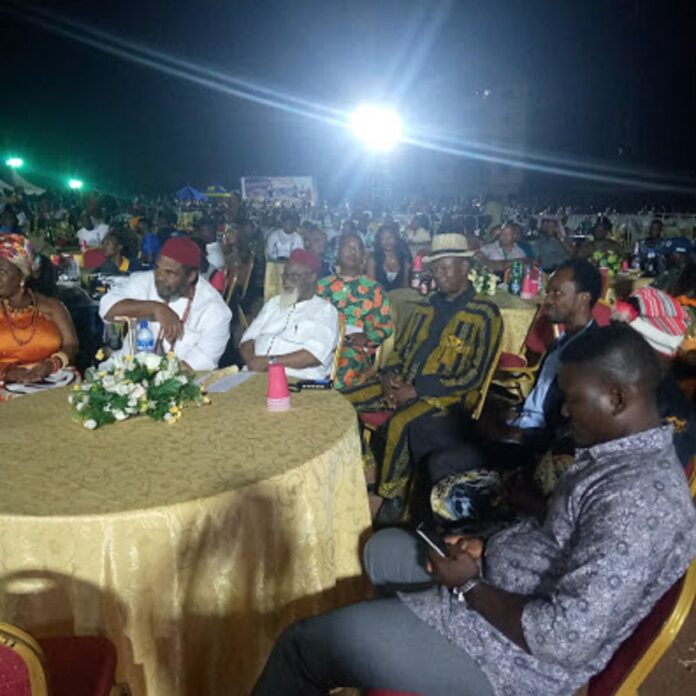 Chief Pete Edochie, celebrated nollywood actor had never hidden his disdain for men who kneel to propose to a lady. His disdain was glaring again during the Igboezuo Cultural Event at Nnewi on new year eve of  2020 which held at Kings Palace Hotel Extension.

When he was asked to project the virtues inherent to republican Igbos, he deviated and took swipes at men who follow western culture and kneel to propose to a lady. He described it as incorrect.

According to Pete Edochie  ” kneeling down to propose to a woman is totally wrong. It is not our lifestyle. Kneeling down before a girl in Igboland means you are handing over authority to her. Marriage in Igboland is when a lady gives her husband to be wine while kneeling down. It signifies that the man has been accepted  as the husband . It is the lady who kneels before the husband and not the other way round”

Pete Edochie told the stunned audience that  he has been married for fifty years and and did not propose by kneeling and yet nobody has ever come to settle disputes for him, and asked elders to correct younger generations who follow western tradition. He attributed marital crisis in the family to lack of submission.

His controversial remarks and insistence were received with cheers from the male crowd at the event while the ladies murmured  in protest.

The former governor of Anambra State, Dr Chukwuemeka Ezeife in his address, asked Ndigbo to be circumspect wherever they are in order to avoid jealousy. According to the the octogenarian “our people should not go to a foreign land and be bragging, and intimidating their host with their success. This has made people to resent them everywhere. Igbos should make money in host communities, but let us not be noisy about it and attract unnecessary jealousy.”

He asked Ndigbo to put their acts together so they can be  positioned  to lead the nation politically. He thanked the organizers for a wonderful evening.

The Chairman of Ibeto Group of Companies, Chief Cletus Ibeto in his submission praised the virtues of hardwork as the way Igbos will rise to the top. He used himself as example and explained how he started his journey to fame and riches. He promised to be available at any other Igboezue Cultural event.

Senator Dr Ifeanyi Ubah promised to support another edition of Igboezue , and asked the organizers to continue the good works

The Director General of Igbo Mandate Congress, Rev Obinna Akukwe , described the event as the peak of Igbo entertainment and praised the Onye-ije Media  and Mazi Ifeanyi Nwosu for an evening where Igbo cultural heritage is revived.

The chief host, Mazi Ifeanyi Nwosu described himself as an Igbo comedian,Igbo teacher and newscaster and gave a history of how he moved from the scratch and rose to stardom, including how he survived in Europe.

The audience was entertained by the Ezeigbo of Australia, while Ezeigbo of some other nations were in attendance. The event had Zuby Michael as the Master of Ceremony, assisted by a local MC from the area.

Klint da Drunk, Mr and Mrs Imo, Obiligbo Boys , Egedege Dance , Paul Nwokocha were among many entertainers who held sway from 8pm till late into the new year while many dignitaries and multimillionaires were in attendance. The audience was entertained with red yam with palm Oil, and Abacha, deliciously prepared with all the ingenuity of Nnewi recipe.

The first edition of Igboezue held in Lagos in 2018, while the second edition which held at Nnewi drew close over six  thousand participants.