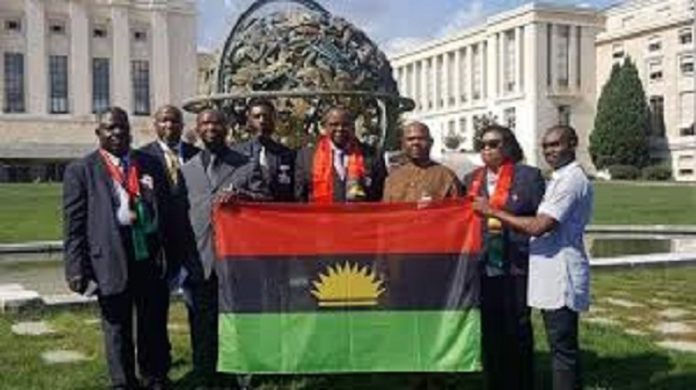 Ndigbo in diaspora have sent a warning signal to Nigerian politicians not toy with the success of the proposed Nigerian president of Igbo extraction or be prepared to see the negative side of the diasporan Igbo.

Specifically, they stated that once Ndigbo lost the seat in 2023, they would all join the Indigenous People of Biafra, IPoB, one of the most vibrant separatist group to heighten the agitation for the restoration of Biafra, as an alternative to Igbo presidency.

Welfare Offi er of Nigerians in the Diaspora, Godson Azu who disc!osed this yesterday in Awka, Anambra state capital during the official launching and unveiling of Global Movement for Igbo President 2023, said the worst thing to happen to Ndigbo in particular and Nigerian in general would be to lose the 2023 Igbo presidency project.

Azu who is also Vice Chairman, Abia state people in the diaspora, noted that the quest for Igbo presidency was a just course and a task that must be accomp!ished for sake of equity and justice.

Earlier, coordinator of the Global Movement for Igbo president 2023, Comrade Kennedy Iyere noted that though not an Igbo man, he chose to coordinate this programme to ensure an emergence of a Nigerian president of Igbo e traction for sake of fairplay, justice and equity.

According to iyere, “we want an Igbo president who will not spent his own money for campaign so that when he wins, he will not border to recover his money and on the process, indulge in corrupt practices”.

Former civilian Governor of Anambra state, Dr. Chukwuemeka Ezeife, said the easiest way of getting the Igbo presidency would be to kneel down, beg and lobby other ethnic groups to use their conscience and support the Igbo presidency project, come 2023.