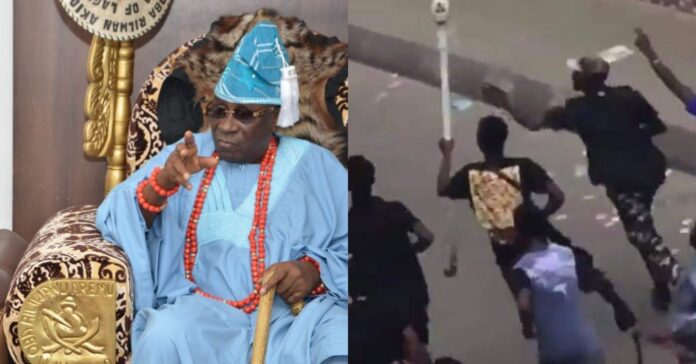 Lagos Chief, Babatunde Olorogun-Etti, on Sunday described the attack of the palace of the Oba of Lagos by miscreants and hoodlums as insulting, callous and barbaric.

‘’The carrying of the Staff of Office, the visible symbol of the Lagos throne is a taboo’’.

He also blamed some parents in the country for not bringing up their children in accordance with the accepted laws of good breeding and respect.

‘’I was dumbfounded when I saw the footage of the palace attack. I could hardly believe my eyes. It is a very grave offence, a disgrace to Lagosians, a disgrace to the Yoruba Nation’’’

In a statement in Lagos Island, Olorogun-Etti demonstrated his contempt against those behind the Lagos palace attack.

The highly respected Lagos chief underscored the scorn, desecration of the traditional institution of Lagos and the consequences on the perpetrators of this dastardly act

‘’It is a deliberate act and will have bad consequences on the perpetrators.

He urged them to repent, return the staff of office and apologize to the good people of Lagos State.

He commended members of the traditional council for exercising restraint in the face of the provocation.

Olorogun-Etti prayed for longer life for the Lagos monarch and God’s blessings of good health.

He also urged Governor Babajide Sanwo-olu to leave no stone unturned in dealing with the perpetrators.