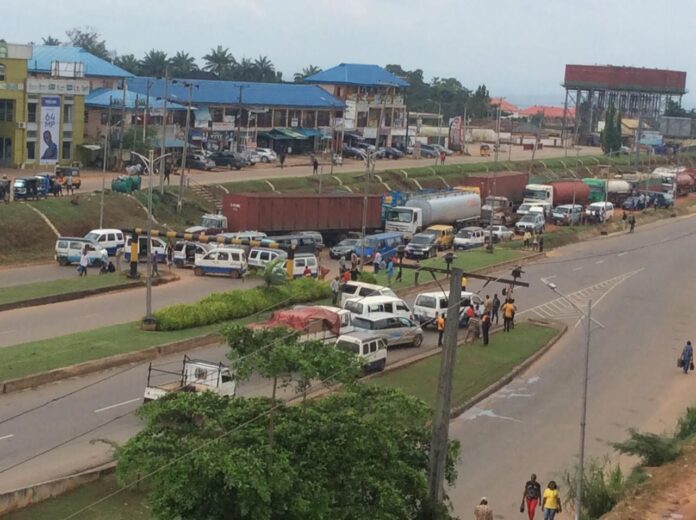 As the ongoing nationwide protests for the authorities to disband the notorious Special Anti-Robbery Squad (SARS) unit of the nation’s police force enters its second day in Awka, the Anambra state capital, normal life, business and governmental activities were completely brought to a halt in the last two days -Wednesday and Thursday.

This disrupted commuter and other business activities as citizens and road users who were taken unawares were jolted into turning back or waiting endlessly to see things normalize.

Some police patrol vans filled with officers were seen in front of the PEEZ Pharmacy/Supermarket at Arroma junction, with none of the officers stepping out or talking to any of the surging crowd of #endSARS protesters. It was observed that once they sense that the atmosphere gets to charged, they stealthily drive off peacefully.

It was amazing that the protesters most of who wore black t-shirts and Jean trousers looked like visitors who were not conversant with the Awka terrain or environment, reason they adjusted their base from the Government House area to Arroma junction when they realized that Arroma was the main city center of activities on the second day.

There was however a yet to be confirmed claim by a female student (names withheld)that some of them who are local students in Anambra-based universities who were coopted into the protest by the organizers were handsomely paid. She had also admitted that they were a combination of past students, active students and those already called up for their National Youth service(NYSC).

None of the apparent leaders of the protest who used vehicles to block the highway could volunteer interview. Not even when informed that SARS has already been ended by the FG and that the Inspector general of Police(IGP) has already started looking beyond SARS era.

The articulate manner of the #endSARS protest and the storm with which it has taken over most key Nigerian cities has evidently rattled the FG authorities especially as it coincided with the October 2020 date given by the Indigenous People’s of Biafra (IPOB) for the dismemberment of Nigeria.