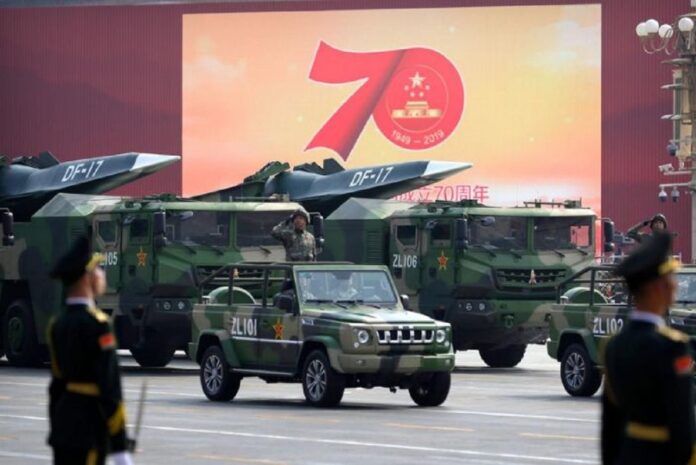 China’s People’s Liberation Army (PLA) has already surpassed the U.S. in missile development and its number of warships and air defense systems under the Chinese Communist Party’s plan to achieve dominance by 2049, the Defense Department said in a sobering report Tuesday.

The ultimate goal of the People’s Republic of China, or PRC, is to “develop a military by mid-Century that is equal to — or in some cases superior to — the U.S. military, or that of any other great power that the PRC views as a threat,” the DoD’s annual report to Congress said.

To that end, the PRC has “marshalled the resources, technology, and political will over the past two decades to strengthen and modernize the PLA in nearly every respect,” the report said.

Under the national strategy pressed by Chinese President Xi Jinping, the result has been that “China is already ahead of the United States in certain areas” essential to its overall aim of progressing from homeland and periphery defense to global power projection, the report said.

“The PRC has the largest navy in the world, with an overall battle force of approximately 350 ships and submarines, including over 130 major surface combatants,” the report said.

In some respects, China is also ahead on integrated air defense systems with a mix of Russian-built and homegrown systems, the report said.

“The PRC has one of the world’s largest forces of advanced long-range surface-to-air systems” — including Russian-built S-400, S-300, and domestically-produced anti-air systems — making up “part of its robust and redundant integrated air defense system,” the report said.

Despite the advances, the PLA “remains in a position of inferiority” to the U.S. in overall military strength, said Chad Sbragia, the deputy assistant secretary of Defense for China.

The 173-page DoD report “does not claim that China’s military is 10 feet tall,” but the Chinese Communist Party wants it to be, and has the plan and resources to reach that goal, Sbragia, a retired Marine officer, said at an American Enterprise Institute forum on China’s military.

At an earlier Pentagon briefing on the report, Sbragia said Beijing’s military strategy was driven by the view that the U.S. has decided upon a long period of confrontation to counter the global spread of China’s influence.

He said that China “increasingly views the United States as more willing to confront Beijing on matters where the U.S. and PRC interests are inimical.”

“The CCP leaders view the United States’ security alliances and partnerships — especially those in the Indo-Pacific region — as destabilizing and irreconcilable with China’s interests,” Sbragia said.

The DoD report, titled “Military and Security Developments Involving the People’s Republic of China” comes about two weeks before Congress is set to return from recess to convene a Senate-House Conference Committee on the National Defense Authorization Act and the defense budget for Fiscal Year 2021.

Defense Secretary Mark Esper has acknowledged downward pressures on the defense budget to offset the enormous costs of the COVID-19 response while arguing for sustained increases of 3-5% in defense spending in future years to maintain U.S. superiority and readiness.

The 20th annual report on China by DoD noted the “staggering” improvements in China’s ability to build, coordinate and project power since the first report was issued.

“DoD’s first annual report to Congress in 2000 assessed the PRC’s armed forces at that time to be a sizable but mostly archaic military that was poorly suited to the CCP’s long-term ambitions,” the report said.

“More striking than the PLA’s staggering amounts of new military hardware are the recent sweeping efforts taken by CCP leaders that include completely restructuring the PLA into a force better suited for joint operations” and for “expanding the PRC’s overseas military footprint.”

The PLA has already established its first overseas military base in Djibouti, about a mile from U.S. Africa Command’s main base on the Horn of Africa.

Despite the progress made by China’s military over the past two decades, “major gaps and shortcomings remain” in readiness and operational capability, the report said, but China’s leaders are acutely aware of the problems and have detailed plans to overcome them.

“Of course, the CCP does not intend for the PLA to be merely a showpiece of China’s modernity or to keep it focused solely on regional threats,” the report said.

“As this report shows, the CCP desires the PLA to become a practical instrument of its statecraft with an active role in advancing the PRC’s foreign policy, particularly with respect to the PRC’s increasingly global interests and its aims to revise aspects of the international order,” it added.