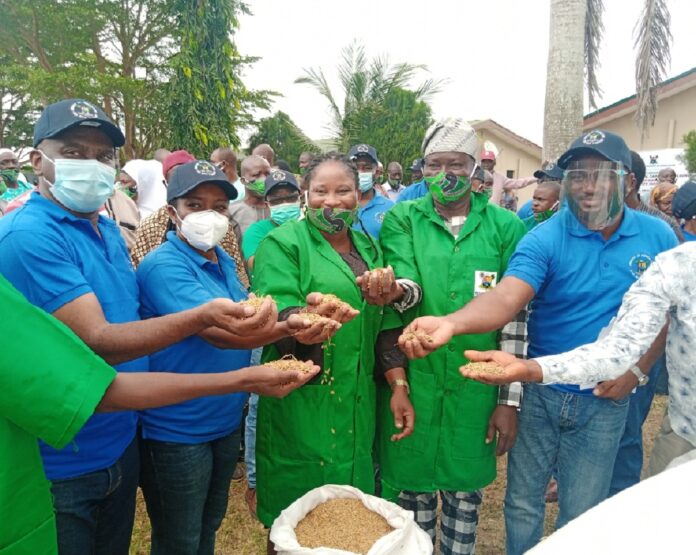 The State Acting Commissioner for Agriculture, Ms. Abisola Olusanya who gave out the empowerment tools today at the beginning of a three-day capacity building and training of the rice farmers on current production practices in the rice value chain explained that this strategic intervention by the State Government was informed by the need to boost the farming activities of rice farmers in the State.

She pointed out that empowerment of the rice farmers was also geared towards ensuring the sustainable supply of paddy by the Rice farmers particularly bearing in mind the imminent completion of the State-owned Imota Rice Mill project.

“It is expected that if these farming techniques are adopted by the farmers in the next planting season, it will result in an increase in paddy production in the State to an expected average yield of four tonnes per hour,” the Acting Commissioner averred.

Olusanya explained that the capacity building and training was expected to give all participating farmers the opportunity to gain hands-on experience in modern and improved rice farming techniques.

She added that the training would also expose the farmers to efficient harvesting methods by using the most up-to-date agricultural practices to ensure maximum output, improved yield as well as to derive maximum return on investment.

“Due to the fact that the State has limited agricultural cultivable land area and with the increasing rate of small and large scale Rice Mills across the nation, there is a strain on the State getting constant supply of paddy to feed the mill when it becomes fully operational.

“It is to this end that the Ministry has embarked on the sensitization of Rice farmers to train and disseminate the current production practices and empowerment geared towards sustainable supply of paddy by Lagos Rice farmers towards the Imota Rice Mill project,” Olusanya said.

She noted that the 32metric tonne per hour Rice Mill at Imota was nearing completion stressing that at full capacity, it would produce 115,200Metric Tonnes of milled rice which would require about 280,000Metric Tonnes of paddy per year, hence the need to stock enough paddy to ensure a smooth take off of the Mill.

According to her, the training was necessary in order to bridge the rice demand deficit of the residents of the State and the Federal Government’s current ban on importation of rice.

“The administration of His Excellency, Mr. Babajide Olushola Sanwo-Olu is committed to the delivery of his campaign promises to Lagosians as embedded in the “THEMES Agenda”. An important component of it is making Lagos State a 21st Century Economy in which Agriculture and food security have critical roles to play.

“Hence, the commitment of the government to construct the 32MTPH Rice mill at Imota in order to bridge the Rice demand deficit of the State and indeed, the nation especially due to the current ban on importation of rice into the country,” she asserted.

She averred that the training would take place in 20 locations cut across Ikorodu, Epe, Badagry, Gboyinbo, Idena, Obada, Ito Ikin, and Ise adding that they would be trained on global best practices and the most effective ways to grow their rice.

“We would be monitoring these farmers to see how their yield improvement is going to be such that we can take the training forward from there while also helping them around empowerment issues such as land clearing tractorization, swam buggies and others which I believe we would be able to provide for them.”

“The rice will be very healthy. A lot of what we import is over-processed and what we end up getting is the white rice which means that the bran is completely off which is the most proteineous part of the rice grain. What we are going to be producing here is local rice but it is going to be of very high quality. That is why we will be getting the improved seedlings from IITA,” Olusanya affirmed.

Responding, the National Deputy President, Rice Farmers’ Association of Nigeria, Mr. Segun Atho appreciated the State Government for the training initiative and especially on rice farmers in the State.

He noted that the training and capacity building would go a long way in providing the needed paddy for rice production for the nearly completed Imota Rice Mill while simultaneously improving the economic status of rice farmers in the State.