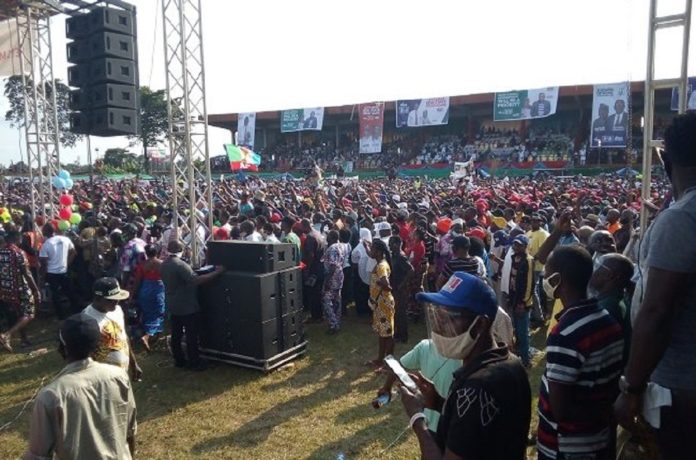 Buoyed by the cheering crowd at the flag-off of the campaign by the Edo State governorship candidate of the All Progressives Congress (APC) Pastor Osagie Ize-Iyamu, at the University of Benin (UNIBEN), Yobe State Governor Mai Mala Buni on Saturday predicted an overwhelming victory for the APC candidate in the September 19 election.

Governor Buni, the National Caretaker Chairman of the APC said that the party was poised to collect what rightly belongs to it following the defection of Edo State Governor Godwin Obaseki to the Peoples Democratic Party (PDP) where he is seeking his re-election.

Speaking in the same vein, Kano State Governor and national chairman of APC Campaign Council Abdullahi Ganduje said that he and his colleagues were eagerly waiting for the swearing-in of the APC candidate as his victory was as sure as tomorrow.

Governor Ganduje commended the recent oath-taking by the 14 members-elect of the Edo State House of Assembly who met to elect Victor Edoror as speaker with the support of three other lawmakers who joined after resisting pressure to defect to the PDP.

Impressed by the turn out of the party faithful who waited patiently for hours in the sun for the commencement of the ceremony, Ize-Iyamu declared that the party will win all the 18 local government areas of the state.

The governorship candidate promised to empower Edo people and develop the state, noting that he intends to campaign vigorously in all the 18 local government areas starting from Monday, August 10.

Oshiomhole, a former governor of the state slammed Obaseki for describing Edo youths as miscreants, adding that the incumbent has signed several Memorandum of Understandings with nothing to show for them.

He said that it was cause for great concern that Obaseki closed down the College of Education, Ekiadolor which he upgraded to a university, College of Agriculture, Iguoriakhi and the School of Nursing, Benin, assuring that Ize-Iyamu will reopen them if voted in.

He appealed for peace, saying: “Say no to violence. Some people wore red during my election while I wore white. Red signifies blood while white is for peace. God will give us the temperament to resist their provocations.”