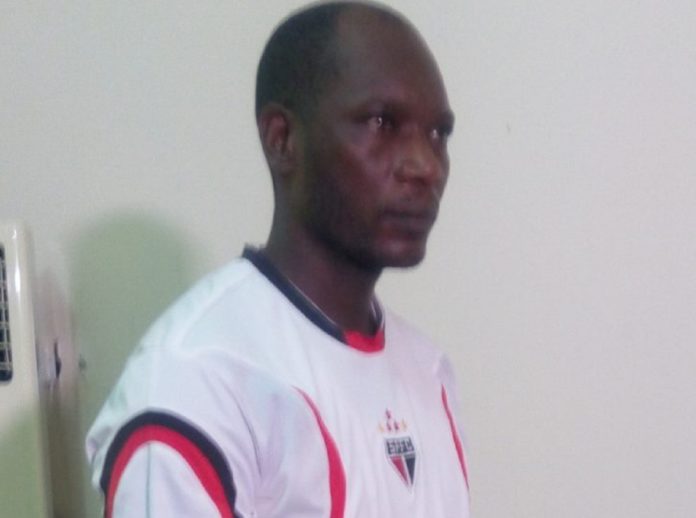 The Department of State Services (DSS), Taraba Command, on Friday paraded 45-year-old Ishaya Jonathan, for impersonating as an Assistant Director in the Service.

Jonathan was also paraded for defrauding unsuspecting members of the public.

Alhaji Bashir Abubakar, the state Director of the Service disclosed that the suspect  was arrested at an hotel in Jalingo, where he has been hibernating with his ‘wife’.

Abubakar said that the suspect, who hails from Lafia, Lamurde local government area of Adamawa, was only released from prison in December 2019, after serving a three-year term for the same offence.

”Jonathan has continued parading himself and defrauding people in Gombe, Yola and Jalingo under the pretext of being a very senior staff of DSS.

“The suspect lied to his victims, including the purported wife that he was recently transferred from Gombe to Nasarawa state, apparently to cover up fraudulent identity from his acclaimed wife and the general public.

“One of his latest victims is a 50-year-old divorcee and mother of four who he met in Gombe early this year and proposed a marriage laced with deceit.

”The marriage was purportedly solemnised by a Malam in Yola, in the absence of the affected woman,” the DSS boss said.

He further said that Jonathan, who was hitherto a Christian, claimed to have converted to Islam and now bears Shuaibu Adamu, to fulfil one of the conditions offered as prerequisite for marriage by the affluent wife.

” He was discovered to have made away with several belongings of the purported wife to an elusive matrimonial home in Jalingo, but the property cannot be traced, suggesting that they might have been sold,” Abubakar said.

He said that the suspect also deceitfully collected the woman’s Honda Odyssey vehicle with promise to buy her a brand new Toyota Vibes when he collects his leave allowance and other packages from the Service.

“He later turned the vehicle to commercial venture, traversing Bauchi and Gombe States, while deceiving the woman that he is at his new duty post in Nassarawa state Command of the Service.

”The suspect told the woman that he was not released to visit her in Jalingo, owing to the COVID-19 pandemic and several operations he was involved in,” he said.

The News Agency of Nigeria (NAN) reports that the suspect, who confessed to the press that he was guilty of the crime, blamed it on the devil and said he deeply regrets his actions.

“it is true that I am impersonating the Service and  I regret my actions.

“It is the work of the devil, I have diabetes and hypertension so, at times I used to fall down due to over thinking,  I don’t know why I was doing this.

“I used to work in a construction company before I started this business,” he said.