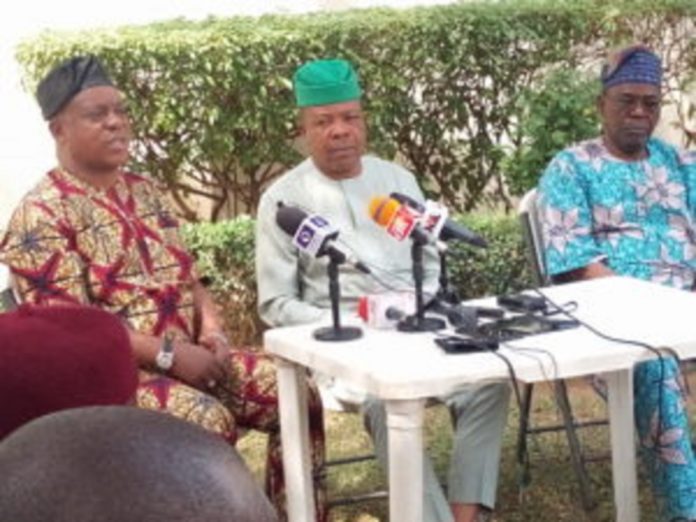 Mr Emeka Ihedioha, the Peoples Democratic Party (PDP) governorship candidate in Imo, said his faith remained strong in Nigeria, its democracy and institutions, in spite of the Supreme Court judgment that removed him as governor of the state. Ihedioha stated this on Saturday when he  received members of the PDP National Working Committee (NWC) led by its National Chairman, Mr Uche Secondus, who paid him a solidarity visit at his Abuja residence.

Ihedioha said, though the verdict was a shock to him, he remained calm and would always take solace in God at all times.“We are faithful believers in God and God does not sleep. This will make history in many ways and so this is a historical process, historical action, and I am sure there will be historical answers at the end of the day.“I want to assure you that we will remain resolute and committed to the ideals of our great party.“I want to say that that event will not put into question our faith in the Nigerian nation.

It will not question our commitment to democracy, it will rather strengthen our resolve to match forward and make Nigeria a greater nation.“I am certain that from the events of that day, Nigeria will emerge a stronger and greater country.

“I want to urge you to continue to work with all lovers of democracy across board so that we can all put our heads together and match forward,” Ihedioha said.

According to him, how the matter was settled by the Supreme Court would define the future of Nigeria’s democracy.“I am certain that the judiciary and electoral system are well aware that they are on trial.“What is fundamental about this is that the facts of the matters as relates to Imo state governorship election is the foundation of our democratic processes,” he added.

Ihedioha said the election was not about him or Imo, but about the future of Nigeria’s democracy.He, however, said it was not time to celebrate, but rather a redefining moment for sober reflection.

Speaking earlier, Secondus urged Nigerians not to trivialise the Supreme Court judgement on Imo and that the PDP would not join issues with those he claimed deliberately and knowingly undermined the country’s democracy.“In the case of Imo, we have more questions than answers because we can’t see the figures adding up. These are the questions agitating our minds and the minds of Nigerians.

“I want to appeal to our brothers who are on the other side, to stop trivialising these issues. They are of fundamental importance in nature.“References are made in Sokoto, Rivers and Zamfara states. You cannot compare what happened in those states with Imo.

“The other ones are intra party. Let them come out and tell us what really happened, from the Tribunal, to the Appeal court up the the Supreme court in the 388 polling units,” Secondus said.

“The truth is what we are seeking. We are not against speaking on very respected individuals, we are saying that the figures are not adding up. Can they look into it again? ” he added.

He advised Ihedioha to be strong and not wary, as according to him, the truth would be revealed, if not now, later.