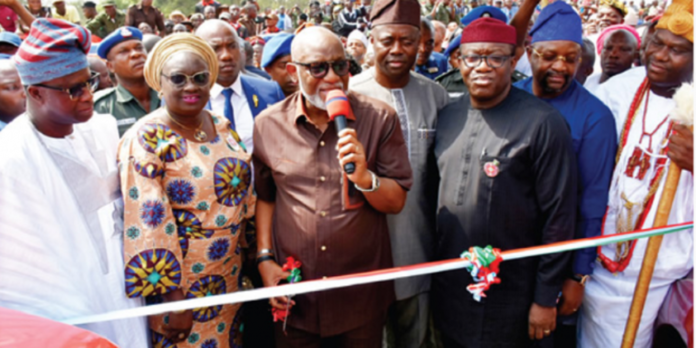 Three days ago bandits along Kaduna Zaria Road attacked a Yobe first class emir. Three of his aides were instantly killed. Kaduna in the last four years has been engulfed in a serious security situation. This has been the same story in Zamfara and virtually all Northern states have one security issue or another, for a while. Some of the security challenges in the North, for instance, the Boko Haram, have  lingered for a decade.

In July last year a daughter of Pa Rueben Fasoranti, a prominent Yoruba leader was killed. Even with heavy security budgets of Lagos and other Western states, kidnapping, banditry, robbery and many other crimes continued unabated.  Every southern region, the East and Niger Delta have their peculiar security challenges.

Security of life and property is one of the primary obligations of government and chapter 12 of the Nigerian constitution clearly state it as one of the fundamental direction of state policy. Alas, lives of Nigerians are cheap,  every day lives are lost, properties perished. The control of internal security of over 200 million Nigerians is under Nigerian Police and here are only 371,670 policemen, obviously they were overstretched and hence the need to complement their efforts.

Six months ago governors of South West mooted the idea to have a coordinated efforts to face crimes and criminality at their domain after holding a security summit. The summit gave birth to Amotekun, which was launched with fan fare eight days ago at Ibadan. Before South West initiative, long ago Northern Governors have similar idea in principle, but for long it was not fully articulated to warrant a serious action.

These are few explanations from convener of the last week event and Governor Rotimi Akeredolu, a Senior Advocate of Nigeria (SAN), said while no state in Nigeria was immune to insecurity, it had become embarrassing that the South-West, with its historical accommodating nature, has become a centre of many negative stories of attacks in recent times.

“We cannot predict the exactitude where this unfortunate disturbance will take place, hence we felt that a combined effort of all of us would be very necessary. It would save us from all these banditries, terrorism, kidnapping, armed robbery, herdsmen/farmers clashes, ritual killings and cybercrime. The current situation in the country demands pragmatic and proactive solutions. “The sustained onslaught on the lives and property of our people compelled the adoption of serious countermeasures to stamp out the menace within a short period. We shall not relent until the entire space is secured.

At the launching of Amotekun, the host Governor, Engr Seyi Makinde, stressed that Amotekun is to fight a common enemy. That enemy, to him, is not Nigeria but the criminal elements within their midst and their collaborators “who are determined to cause commotion within the borders of our states and threaten our peaceful coexistence.”

Makinde allay fears, “To those who are afraid, I say, when we assumed office we all took the oath of office and promised to be faithful and bear true allegiance to the Federal Republic of Nigeria; To follow the dictates of the constitution and protect the sovereignty of the Federal Republic of Nigeria. We have not forgotten our oath. “Our regional integration, our coming together, should be seen in one light a alone: That we are coming together to fight a common enemy. That enemy is not Nigeria. “As this launch proceeds today, we will find that this architecture we have put together is in harmony with the constitution we swore to protect. “We will also learn that everything we have outlined to do with Amotekun is in line with the existing security architecture in Nigeria. All we are doing is creating an appendage of local vigilantes that will feed the current state apparatus.”

These are genuine security problems across the federation and is beyond manpower capacity of the federal security, for this reason then, should we fold our arms and leave these criminals and miscreants to have field day and rule the streets, the jungles and the cities?. It is against this background that  I don’t subscribe to the  Attorney General of the federation, Abubakar Malami (SAN) pronouncements disbanding Amotekun.

Eventhough I am from Northern part of Nigeria i fully and wholeheartedly support Amotekun. This program is long overdue and is in the best interest of Nigeria. Security issues is beyond politics and economic gains, it is our survival as a Nation. Every Nigerian region need one Amotekun or another to complement our federal and conventional security formations.

Development Agenda of Western Nigeria, DAWN has matched rhetorics and action and has developed  Western Nigeria Security Network aka Amotekun, they did it discarding all their political differences, articulated a position on security which is a genuine corcern! Can’t our leaders from North  copy from WNSN to have NWSN that is North Western Nigeria Security Network?,  Can’t  we have more of such formations to address and improve Middle Belt and North East security concerns? And have similar ones at East and Niger Delta.?

Let us all support South West governors and encourage other governors across the federation to emulate them, so that we have peace and prosperous states. If there are any reservations in respect of organization, structure and methodology let us agree for the areas needing attention and forge ahead. Let AGF reverse that order, as it was done hastily. Amotekun was approved by NSA and as their Chief Security Officers of their respective states, disbanding through fiat would not augur well for the polity. Let the principal stakeholders get in touch with each other, rub minds and take other regions on board for a sustainable and concerted, meaningful program for the benefit of all.

Bello Muhammad Sharada writes from Kano and can be reached via email: bellosharada@gmail.com or thru his Twitter handle: BelloSharada@goggo4347

Army, Adeniyi and the Truth – By Madu Onuorah