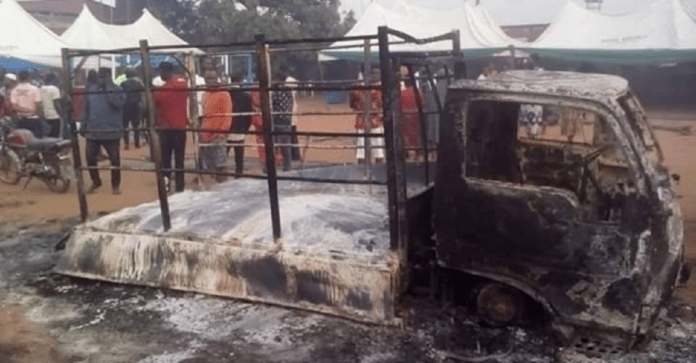 The faceoff between Governor Godwin Obaseki of Edo State and the national chairman of the All Progressives Congress (APC), Comrade Adams Oshiomhole, got messier on Saturday, as  yet to be identified thugs set ablaze the venue to be used for a political rally in Auchi, Estako West local government area.

The rally which was to hold at a field owned by a private individual, was said to have been organised by Oshiomhole to receive some defectors into the APC.

Sources had it that the suspected thugs who invaded the venue at about 2 am, shots sporadically before they set ablaze over 1000 chairs, the podium, several canopies and two cars.

It was learnt that heavy security was being deployed to the area to forestall further attack.

A chieftain of the APC in the State, Mr. Victor Oshioke, who confirmed the incident to our correspondent on a telephone interview, described it as a new dimension in Edo politicking.

Oshioke who is a former spokesman to Adams Oshiomhole, said charged security agents to fish out the perpetrators and bring them to justice.

“It is very, very unfortunate at this time. While we are awaiting the police to do their investigation, we want to say that it is quite unexpected and want to the security agent to ensure that those responsible are brought to book, because, it is a new dimension in politicking in Edo state, that nobody can meet peacefully and mutually, something that is guaranteed by the Constitution.

“It’s getting too much, we experienced it in Benin and again we are experiencing it in Auchi. It is very unfortunate.

“They should let Edo people to express their freedom in choosing who rule them. That is our position at this time,” Oshioke said.