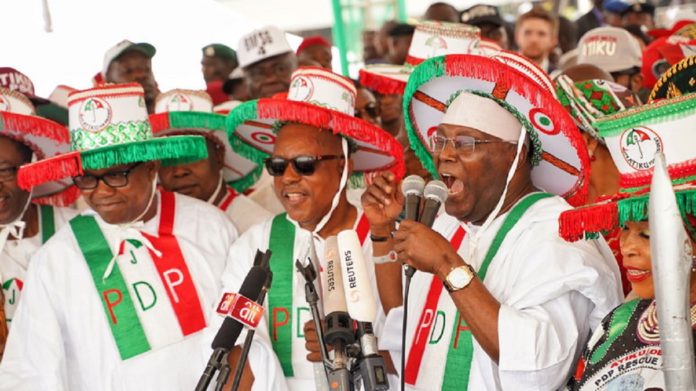 This reporter can confirm authoritatively that there is now a palpable dissension within PDP in Imo State just days after the January 13, 2020 Supreme Court judgment that sacked Emeka Ihedioha as Governor of the State.

According to an insider who requested anonymity, tensions are rising rapidly between PDP leaders and members in Imo State loyal to Atiku Abubakar and elements of the party structure loyal to Emeka Ihedioha.

It will be recalled that in the lead-up to PDP presidential candidate nomination, Emeka Ihedioha got in the bad books of Atiku for not backing his presidential bid and for backing that of Sokoto Governor, Aminu Tambuwal. After Atiku succeeded in picking the PDP ticket, Ihedioha had tried to make amends but that was said not to have worked out as expected. It made matters worse that Ihedioha was said to not have fully supported Atiku during the Presidential election Tribunal process.

Ihedioha was also blamed for the huge votes President Buhari got in Imo State in the 2019 presidential election. The source points out that even in Anambra where Governor Obiano openly backed Buhari, he score only about 33,000 votes as compared to the 140,000 votes that Buhari scored in Imo State.

The source said that Atiku’s loyalists are still wondering how Buhari, a non-indigene, outscored Governor Hope Uzodinma, an Imo indigene, who “INEC had awarded a paltry 96,000 votes in the governorship election compared to Buhari’s 140,000 votes in the presidential election of the same year in the same State”.

Continuing, the source said that Atiku’s camp is still at a loss on how Ihedioha “scored 64,219 in Aboh Mbaise and extremely high votes in Ezinihite Mbaise and Ahiazu Mbaise, compared to the relatively low votes Atiku had scored in the same three Mbaise local government areas”. He added that “Atiku supporters are now feeling that Ihedioha massively rigged these 3 Mbaise LGAs for himself but did not do the same for Atiku. In fact, Ihedioha should be happy that the Supreme Court left those suspicious Mbaise votes intact. Otherwise, he won’t now be talking of revisiting the judgment”.

When asked what they will gain by withdrawing their support for Ihedioha in the post-judgment battles, the source said that “PDP has become used to being the main opposition party in Imo State since the end of Achike Udenwa administration. It is nothing new. And we also feel that Governor Uzodinma has always been a loyal PDP party stalwart until when he decamped just last year to seek the governorship ticket of APC. That alone does not make him an enemy of PDP”.

It will be recalled that PDP has a history of abandoning its governorship candidates since after they last won the Imo governorship with Achike Udenwa in 2003, a whole seventeen years ago. In 2007, PDP abandoned Ararume and backed Ohakim and he won. In 2011, PDP abandoned Ohakim and backed Okorocha and he won. In 2015, it was said that had PDP fully backed Ihedioha, he would have defeated Okorocha.