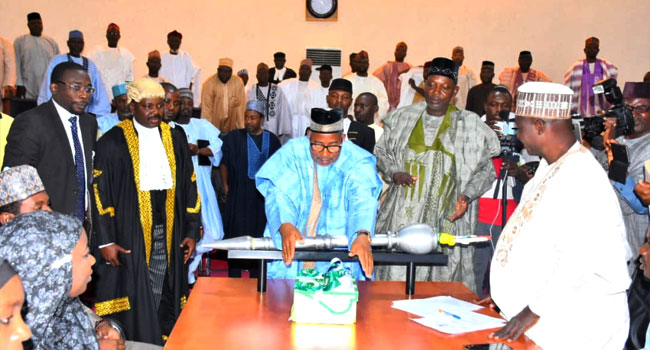 Presenting the budget, tagged: “Budget of Renewal of Hope” to the State Assembly, the Governor said the 2020 budget comprises of recurrent expenditure of N72,615,397,214, representing 43 while capital expenditure is to gulp the sum of N94,600,410,286 representing 57 percent of the total budget.

Governor Bala explained that the proposed budget will pay priority attention to health, education and agriculture.

Other key areas to be prioritized, the Governor said include, youth empowerment, job creation, community development, poverty reduction through the establishment of small scale enterprise, mining, tourism and cooperative development.

He said that the sum of N94,600,410,286 is expected to be spent on administrative, economic, law and justice sector as well as social sector.

The Governor promised who said various road projects awarded by his administration have reach various stages of completion pointed out that 50 percent of the contract sums have been paid to the contractors.

He added that his government is carefully reviewing road projects awarded by the previous administration with a view to completing the critical ones at a more realistic price.

While responding, the Speaker of the state assembly, Rt. Honourable Abubakar Suleiman described the budget proposal brought before the house as the first of its kind, promising timely scrutiny of the proposal.

“Let me reassure His Excellency that we received this budget today with all sense of responsibility and we are determined to discharge our constitutional obligations by scrutinizing the budget dispassionately and at the same time ensure its speedy passage.”

“I am therefore optimistic that the 2020 budget which His Excellency presented before this Honourable House, will serve as the catalyst for the socio-economic condition of all the good people of Bauchi State.” The Speaker said.

Suleiman stated that it is gratifying to note that, the Legislature and the Executive in Bauchi State have so far demonstrated an untiring commitment to the delivery of public good through peaceful coexistence and harmonious working relationship.

He commended the Governor for the unprecedented initiative of organizing public hearing across the three Senatorial Zones in the State on the 2020 Budget, hoping that the tune and tempo of the initiative will not only be sustained but will also be cascaded beyond the zones to each and every Local Government in the State.

The Speaker urged the Governor to direct MDAs in the State to provide the needed information in defence of their budgets, before the relevant House Committees in order to ensure the smooth passage of the fiscal estimates.

“Let me state clearly that our constitutional mandate of budget review and oversight should not and must not be misconstrued as an affront against the workings and operation of the Executive.”

According to him, whatever they will do on the budget proposal should be seen as discharging their constitutional responsibility of ensuring budget implementation as well as necessary ingredient for the provision of good governance in the State.

He assured Governor Bala of the determination of the state assembly to partner with his administration in ensuring that Bauchi State is taken to an enviable pedestal within and outside Nigeria.