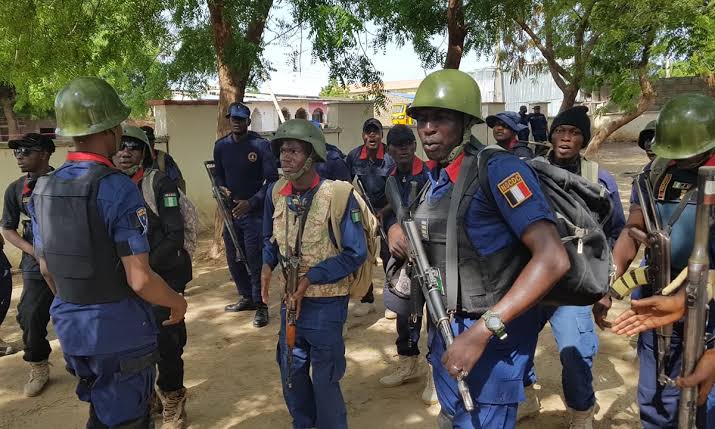 The Nigerian Security and Civil Defence Corps (NSCDC), in Kebbi, have arrested three suspected fraudsters who specialized in defrauding public along Kangiwa – Niger Republic border in Kangiwa Local Government Area of the state.

The Public Relations Officer of the corps, DSP, Bamaiyi Ribah, made this known to newsmen in Birnin Kebbi on Friday.

He said that the incident happened in Amogoro market in Kangiwa Local government area on Nov. 28.

“There was an incident that happened in a market called Amogoro, in Kangiwa LGA, where three suspected fraudsters who specialized in defrauding public along Kangiwa to Niger Republic border.

“The suspects were nabbed after a message had been sent across agencies that one Abubakar Dan-Rabi, from Bunza Local Government Area of the state had been defrauded by a syndicate of fraudsters .

“Luck run out of them and they were apprehended by the Anti- Vandal Scout heads by DC, Sani Anaruwa, of the NSCDC after they carted away with over N300,000 plus from the victim,” he said.

According to him, the suspects were identified by the scout in a car based on the information they had received from the anti-vandal head.

Ribah said that the suspects would be taken to court with charges of fraudulent activities and dealings in fake currency.

“The suspects are: Aliyu Abbas, Babangida Shuaibu and Khalil Adamu,all between 40 and 45 years of age; two are from Funtua Local Government Area in Katsina State while Adamu is from Adamawa State but living in Funtua LGA,” Ribah said.

Speaking on behalf of the suspects, Shuaibu, attributed their action to the work of the devil.

“We believe in good and bad destiny, and we consider this incident as a bad destiny upon us and work of the devil,” he said.