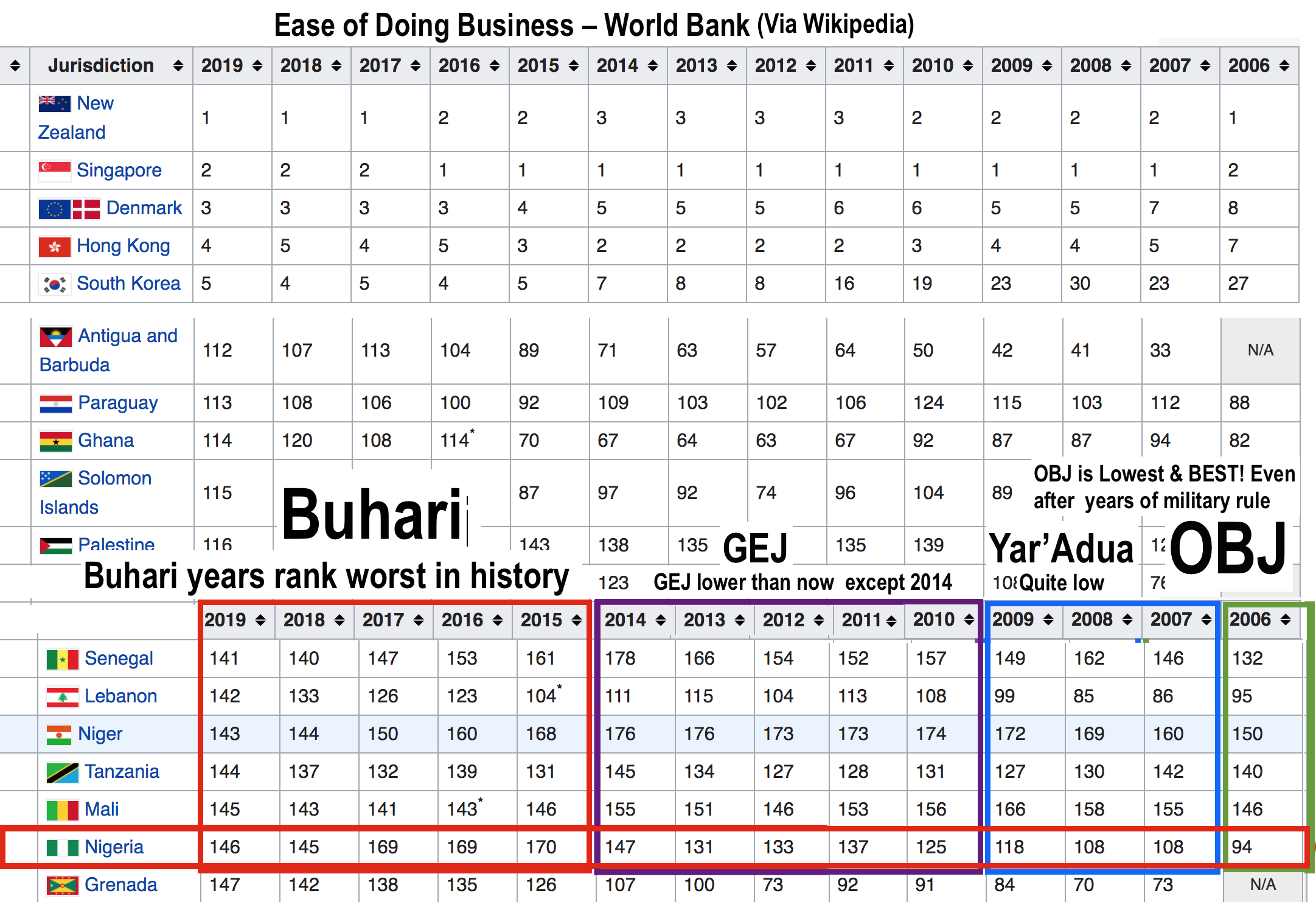 Nigeria’s global rank dropped a point to 146 in the latest “Ease of Doing Business” report for 2019. The Ease of Doing Business Index established by the World Bank, measures the environment and national regulations directly affecting businesses, such as trade across borders, enforcing contracts, getting electricity, access to credit, and various government regulations.

While recent Ease of Doing Business reforms have been widely celebrated as a major economic ‘achievement’ from 2017, a review of the data shows that in fact the current government has done rather poorly compared to previous administrations on this chart.

The facts show that the recent Goodluck Jonathan administration and previous administrations of Yar’Adua and Obasanjo scored far higher on the Ease of Doing Business index.

In 2017 Nigeria recorded a catastrophic hike in the index following Buhari taking over power, dropping 23 points from a rank of 147 in 2014 to 170 in 2015. Since then the country has maintained a poor performance on the metric till 2018 when there was an improvement to 145 mirroring the position in 2014.

Under the business booming years of former president Olusegun Obasanjo when Nigeria’s competitive economic opportunities brought not only foreign investors but an unprecedented influx of Diasporan Nigerians, the ease of doing business was as great as 94 in 2006!

It is necessary to note that Obasanjo was able to create such a positive business environment despite taking over from almost two decades of military dictatorship.

It must be mentioned that since 2015, some data sources online have erroneously and perhaps suspiciously put the 2014 Ease of Dong Business rank of Nigeria at 170. This is false. Nigeria’s rank was 147 in 2014 as the official World Bank department website shows: https://www.doingbusiness.org/content/dam/doingBusiness/media/Annual-Reports/English/DB14-Chapters/DB14-Country-tables.pdf [PDF]

With increased consumption taxation – VAT tax hikes, border closures, stagnation in the power sector, pervasive insecurity, impedance of the Judiciary, increased levies on Nigerians for all banking activities and other issues, it is hard to expect remarkable improvements in Nigeria’s Ease of Doing Business under the current regime.

The Ease of Doing Business and Global Competitive Index give an idea of how economies fare and the opportunities for growth and development. Overall, from a graphic review, Nigeria has steadily declined since Obasanjo, or perhaps we might say, Nigeria has failed to competitively improve compared to other countries of the world.

One can only hope that the downtrend between 2018 and 2019 is not sustained as Nigeria desperately needs a breather.