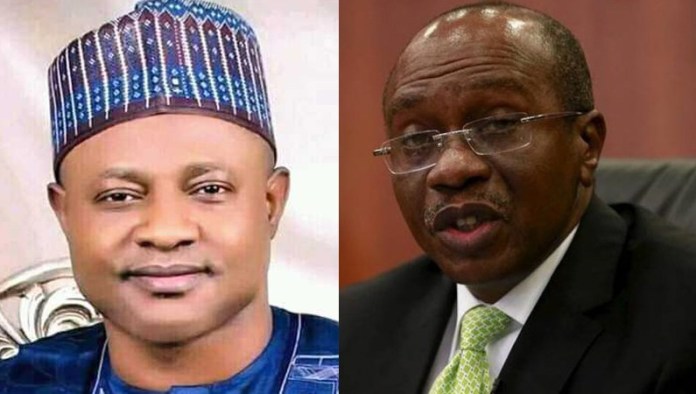 For those who know Mallam Nasir Ahmad El-Rufai, they will all have something to say about his untamed penchant for power, using every means possible.  That El Rufai is eyeing for the seat of the Nigeria Presidency is no news.

The news is, how does he hope to achieve this and what is the role of Senator Uba Sani, and Central Bank of Nigeria Governor – Godwin Emiefele in El-Rufai’s presidential quest?  Believe this, the list of those who have been shortlisted towards achieving his Presidential ambition has been put on motion by Governor Ahmed El-Rufai.

On this list, the role to be played by the Central Bank Governor Godwin Emiefele and Governor El-Rufai’s former aide on political matters who is currently a senator representing Kaduna Central Senatorial Constituency, and Senate Committee Chairman on Banking, Insurance and other Financial Crimes, Senator Uba Sani have been planned and set rolling.

But before then, how did Governor El-Rufai catch and grip the CBN Governor on the jugular?  What role did Senator Uba Sani play and what role would he still play towards his boss 2023 Presidential ambition.

According to a publication in 2015 by PowerSteering Magazine, that investigative magazine detailed how Senator Uba Sani used his office as El-Rufai’s choice aide to coerce the Central Bank Governor Godwin Emefiele into submission.  It was reported that no sooner President Muhammadu Buhari won the 2015 election than Uba Sani reached out to Godwin Emefiele with a threat that his boss (Mallam Nasir El-Rufai) would stop at nothing to ensure that President Buhari  arrests and prosecutes Godwin Emefiele for what he termed “Emefiele’s Pro-PDP antics, including funding former President Goodluck Jonathan”.

Senator Uba Sani was said to have threatened the lily-livered Godwin Emiefele that they had intelligence report of how he opened the national vault to fund PDP government, especially in the heat of the 2015 political campaign.

LeadingReporters learnt that Emefiele fell for the trap and dished out a whooping N400m in different tranches to pacify his accusers.  Afterwards, the treacherous Uba Sani foisted Mallam El-Rufai’s daughter and two of his younger brothers (Suraijo and Junaidu) and one Ms Nkechinyere Ekeh who was a branch manager of Access Bank Abuja on Godwin Emefiele for immediate employment into juicy positions in Central Bank of Nigeria.

The Magazine reported that the glaringly fearful and threatened Emiefele succumbed and offered a deal to El-Rufai.  A deal, LeadingReporters was told would see Emefiele funding or creating an avenue for funding El-Rufai’s Presidential Ambition come 2023.

Recall that after the general election in 2015, it was said that President Mohmammedu Buhari expressed displeasure to work with Godwin Emefiele.  On one occasion, the glaringly angry President Buhari tongue-lashed Emefiele in a dinner organized in the President’s honour by US Chamber of Commerce in Washington DC, few weeks after President Buhari was elected for “smuggling in” Jim Ovie into a conference in USA which Jim Ovie was not officially invited.

Meanwhile, CBN and its affiliates such as NIRSAL, BOI are massively funding investments and SMEs in Kaduna State. A move LeadingReporters learnt is targeted at projecting Governor Nasir El-Rufai as an investment trailblazer.

In our next edition, we would avail you details of how the monies paid by Emefiele to Uba Sani were released to Mallam El-Rufai through Uba Sani in his Shasha residence in Maitama.  The video and the registered numbers of the SUV Prado Jeep and subsequently, a saloon car which hauled the monies to Senator Uba Sani would be released.

All these monies which were received by Uba Sani in the tranches of N200m, N100m, N30m, and N60m were subsequently moved to his account with Zenith Bank, Maitama with the names Isman Global Investment Ltd and U & M Global Investment Limited on dates that would be published.

Furthermore, we would as well reveal to you how Senator Uba Sani, who warmed himself into the heart of Mallam El-Rufai when he was the FCT minister cornered eleven plots of land, originally meant to be given to some selected Editors.  This was contained in a recent petition by concerned Nigerians to the anti-corruption agencies.  Recall that Arewa Youths For Change had previously petitioned President Muhammadu Buhari on the nefarious activities of Senator Uba Sani when he worked as Mallam El-Rufai’s aide.