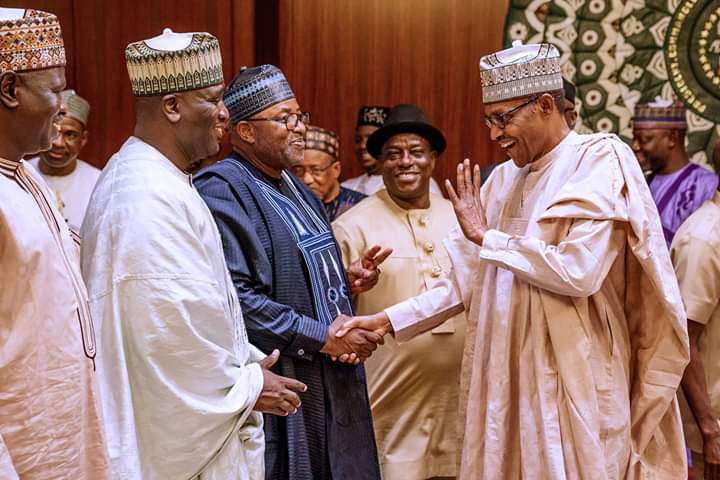 The die may have been cast over the Bauchi State political theatre following the recent visitation to the President of the federal republic of Nigeria, Muhammadu Buhari by the National Chairman of the All Progressive Congress [APC], Adamu Oshiomole in the company of the former Governor of Bauchi State, Barrister Mohammed Abubakar over the leadership imbroglio brewing within Bauchi State House of Assembly.

A faction of the Bauchi State House of Assembly after having accepted the terms and conditions of the leadership of the State Assembly under the leadership of Abubakar Suleiman as the Speaker of the State Assembly – were returned to the House of Assembly – only to revert on their agreement of not accepting the Speaker [Abubakar Suleiman] as the leader of the State Assembly. This is as 247ureports.com gathered the honourable members were coerced by the former governor [Mohammed Abubakar] to renege of the agreement in the hopes the National Chairman of the APC [Oshiomole] would get the President’s support behind the renegade lawmakers.

As a caveat, the Bauchi State House of Assembly was thrown into crisis following the start of the process to elect leaders of the Assembly. The State Assembly which comprises of 31 members, of which 22 are APC, 8 are PDP and 1 is NNPP. The crisis led to the composition of a divided house of assembly. Out of the 31 lawmakers, 11 attended the election event and successfully elected leaders for the Bauchi State Assembly. Abubakar Suleiman [APC] was elected Speaker.

The remainder of the 20members who were not in attendance for the election opted to convene a separate election event outside the Bauchi House of Assembly chambers. They elected Kawuwa Shehu Damina as the speaker of the 20member faction.

But shortly following the supposed division in the House, the Damina led 20member faction sought the attention of the Suleiman led 11member faction. Damina group pleaded to return to the folk as members of the State Assembly with full rights and privileges. The Damina group agreed to Suleiman being the leader of the house of Assembly. The two groups re-joined and resumed seatings together.

The dynamics of the achieved peace at the state assembly changed following the announcement of the Economic and Financial Crimes Commission [EFCC] investigation in the former governor’s financial activities in the State.

According to the EFCC, an investigator in the Abuja zonal office of the Economic Governance section of the EFCC, Yakubu Sani, alleged in an affidavit that an intelligence report revealed that the immediate-past governor of the state, Abubakar, in the twilight of his administration, initiated “a process of overdrawing to launder the sum of N19,897,809,334.08. Account number: 0998552074. Bank name: First City Monumental Bank.”

EFCC alleged that the ex-governor had concluded plans to launder the state government’s N11.5bn contained in the account through the issuance of mandates and cheques for the payments of non-executed contracts and fictitious claims to individuals and contractors.

With the new development, the former governor, Mohammed Abubakar took offense. He took the renewed EFCC hunt as being induced by Governor Bala Mohammed. In response, he turned his attention to rekindling the quelled crisis within the state assembly. Through the assistance from the national party chairman of the APC, the former governor convened a meeting with members of the Damina led faction in Abuja. Oshiomole was in attendance. He promised to get the President to intervene.

Some of the state assembly members were not readily willing to join the in rekindling the crisis. But the lawmakers were threatened with party suspension and possible probe into their financial activities during the electioneering period. 17 members of the assembly attended the meeting.

This was the reason the President’s response to the Oshiomole visit was not definitive. He told the delegation led by Oshiomole [Abubakar and 17lawmakers] that he will defer to the Attorney General on what actions and steps to take.