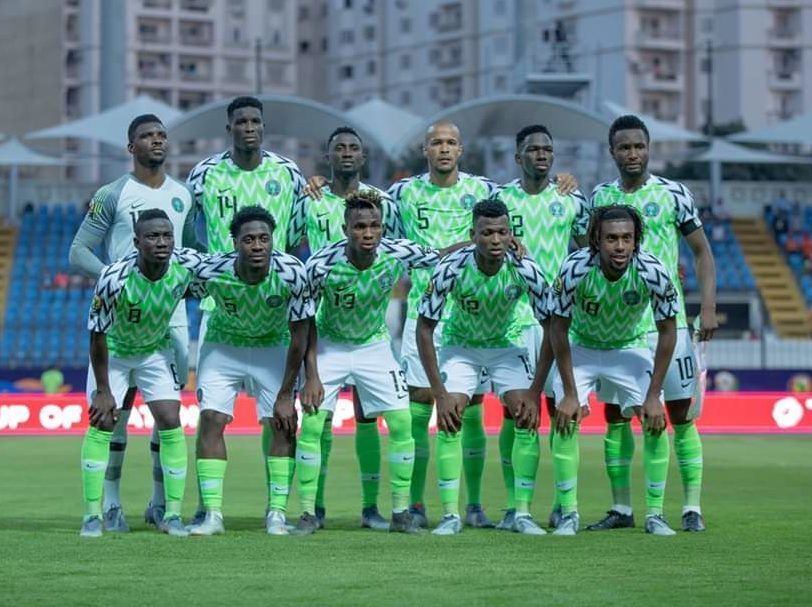 The News Agency of Nigeria (NAN) reports that the Super Eagles had on Wednesday defeated Bafana Bafana 2-1 in a keenly-contested quarter-final showdown at the Cairo International Stadium.

A goal each from Samuel Chukwueze and William Troost-Ekong saw Nigeria eliminate South Africa from the tournament and advance to the semi-finals.

A cross-section of football stakeholders who spoke with NAN in separate interviews said the Super Eagles were well organised and showed great character and determination to win on Wednesday.

Samson Siasia, an ex-international, said nothing could be taken away from the team because they gave everything and worked their socks off on the field of play on Wednesday.

“Congratulations to the players for progressing to the semi-finals and hard luck to South Africa.

“It was also the first time we managed to beat the South Africans by a single goal margin which tells you a lot about how tactical and competitive the match was.

“I must confess that the South Africans were lacklustre in the first half and looked a shadow of the side that eliminated hosts Egypt from the tournament.

“However, in the second half they were marginally superior at a time when the Super Eagles had taken their feet off the throttle.

“Overall it was a very good game of two halfs which saw the better team carry the day and I hope we can carry this momentum all the way to the final,’’ the former Super Eagles coach said.

Emmanuel Babayaro, also an ex-international, observed that while there were shaky moments during the match, the Super Eagles still showed more determination to win the game.

“What a perfect outing for Nigeria! The South Africans were better in the second half and took the game to the Super Eagles. They came back a better team and started playing with passion and intent to win the game.

“I think what also helped them was the fact that Nigeria started to drop back and so they started to have more possession of the ball and more players getting into dangerous spaces.

“They should have gotten a goal or two in the process. Of course they got the needed equaliser from Bongani Zungu’s header after a lengthy and frustrating VAR decision, I must add.

“But yet again, they could have also been more subtle and careful of maybe containing the game and trying to take it to extra time,’’the former goalkeeper said.

Babayaro noted that the South Africans struggled a lot in terms of physicality against Nigeria, adding that they were not quick enough especially in the midfield.

“They were not mobile enough and delayed too much and had too many touches on the ball when they could have released the ball very early upfront in the final third.

“Overall, I think it was a game of two halfs and the superiority of the Eagles showed where and when it mattered most,’’ he said.

Godwin Bamigboye, the Chairman of FCT Football Coaches Association, noted that the Super Eagles performed creditably and were ultimately rewarded for their early probing in the first half.

He, however, expressed disappointment that the Nigerian side failed in the second half to build on what they did in the first half.

“We had two different halfs. In the first half we dominated and took the game to the South Africans.

“We were cruising after we got the first goal and from then on I thought we could have managed the game a lot better.

“However, in the second half, I thought we started defending too early and allowed our opponents to start getting the ball in the right areas.

“I was quite disappointed when they came out really seeming to sit back, which was a dangerous position to be in,’’ Bamigboye said.

He, however, praised Super Eagles’ coach Gernot Rohr, adding that he was eventually vindicated when the second and decisive goal went in.

“I thought Ahmed Musa was a big threat to the South African defence with his pace and I was a bit disappointed when he got substituted because he was causing all sorts of problems.

“But then who are we to judge the coach, especially after Moses Simon who he brought in for Musa was instrumental to the team’s second and winning goal, as he delivered that pin-point cross from a corner kick.

“Overall, we earned the right to win. As much as they were on the back-foot when they conceded, the team fought really hard and that got Nigeria the all-important victory and place in the last four of the tournament.

“I am confident that this Nigerian never-say-die spirit is what is going to see the Super Eagles through to the final,’’ Babayaro said.

“In the first half the Super Eagles did what they needed to do, and got the early goal. But they sat back in the second half a little bit too early and South Africa started putting Nigeria under pressure.

“This is expected in a game, especially of this magnitude, as you don’t expect one team to be in control of the game for the whole 90 minutes.

“Our opponents got the equalizer, but what was more important was the fact that we had two different scorers in the team.

“They didn’t give up and fought until the last minute, believing that there was something in there and they could win the game in regulation time.

“That shows great character and a great determination. Even though when you are aware that you are not playing at your best, but you believe you can win games. That was what we saw in this Super Eagles side,’’ he said.

Mansur Abdullahi, the Assistant Secretary-General of National Football Coaches Association, on his part, singled out Chukwueze, Musa and Simon for praise, adding that they tormented the South African defence.

“I am so excited for Chukwueze. It was his seventh game and first goal for him in the national team colours.

“Musa, Simon and Chukwueze were like thorns in the flesh of the South Africans and deadly on the flanks probing and asking a lot of questions from both the left and right flanks on several occasions.

“Really, you can’t take anything away from the Super Eagles. They had a plan and I certainly think that their class was unbelievable and their superiority showed at the end of the day.

“I look at this present crop of Eagles and think it’s tremendous what they have achieved together. I feel very strongly that they can go on and win this tournament.

“What they did against the South Africans was to give their opponents the space in front of them and denied them the space at the back where Bafana Bafana had thrived against hosts Egypt,’’ he observed.

NAN reports that the Super Eagles now await the winners of the quarter-final fixture between Elephants of Cote d’Ivoire and Desert Warriors of Algeria in one of Thursday’s quarter-final matches.