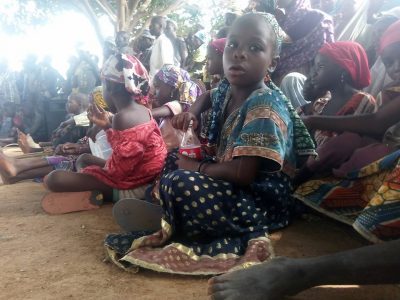 Malam Abdullahi Ubangida, Village Head of Kangimi-Ubangida, Igabi Local Government Area of Kaduna State, has turned his palace into a clinic to reduce maternal mortality in the community.

Ubangida told the News Agency of Nigeria (NAN) in Kangimi-Ubangida on Monday that the gesture was to improve access to health services for women and children, who had to travel 20 kilometers to Kawo General Hospital, the nearest health facility.

He said that lack of health facility in the six communities made him to turn his palace to a Clinic for residents to access healthcare twice a week.

He said pregnant women trek 20 to 25 kilometers to access the nearest hospital in Kawo for antenatal care and other services.

Investigation also reveals that some of the women preferred going to Mararaba Jos to access healthcare.

“This challenge of health facility has made us to lose women during childbirth.

“It is in view of the challenge that I decided to meet with some health workers in town, pleaded with them to be coming to my community to help my people with drugs and other medical advice and donated my palace for them to render the services.

“I do travel on Mondays to town to bring drugs which I keep in my palace before the health workers visit on Tuesday morning. We lack storage facility to keep some of the drugs due to lack of electricity in the community,’’ he said.

He called on the state government to assist the community with a health center for easy access to health facility to save lives of the residents.

“This village has been in existence for about 180 to 200 years and the population of the residents here is over 40, 000 according to local statistic.

“Residents in the community are predominantly Hausa and Fulani by tribe and they have been living in peace and harmony for decades.

“Majority of them are farmers, cattle rearers and petty traders, while most of the women remain as house wives due to lack of skilled acquisition centres to empower them,’’ he explained.

Maryam Musa a resident of the community with five children, expressed concern over the suffering most pregnant women go through in the community as a result of lack of primary healthcare facility.

“Most of the women in the village like family planning, but there is no one or an organization that has ever volunteered to sensitize them about health matters or any preventive measure against infections or diseases.

“Some women still prefer to give birth at home to avert all sorts of suffering due to lack of PHC in the community.

“I want to appeal to Non-Governmental Organisations, Civil society Organisations, UNICEF, WHO and the state government to come to our rescue to save women from infants and maternal related deaths.