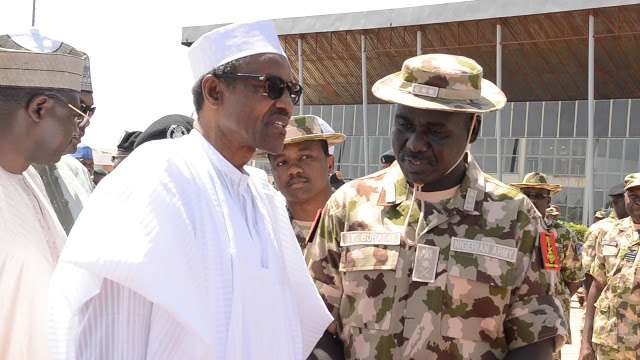 The National Working Committee (NWC) of the Peoples Democratic Party
(PDP) says the defeatist comments by the Chief of Army Staff, Lt. Gen.
Tukur Buratai, on our national security, affirm the position of the PDP
and millions of Nigerians that President Muhammadu Buhari failed in his
duties as a Commander-In-Chief.

The party holds that the blame must be placed at the doorsteps of the
President, who was under oath as the Commander-in- Chief, to ensure the
security of lives and property, but had failed even in his own promise
to lead from the front.

Mr. President, as chief security officer of the nation, should not hide
under an Army Chief to push blames when he had failed to take
appropriate steps to secure the nation and refused to heed wise counsel
by well-meaning Nigerians to reorder his parade and rejig the nation’s
security architecture for effectiveness.

Instead, the Buhari Presidency had carried on with endless lip service,
empty assurances, unnecessary blame game and obvious lack of tact, while
the nation is being ravaged.

There is no doubt that despite the cluelessness of the Buhari
Presidency, our fighting troops have remained gallant, patriotic, making
sacrifices and risking their lives in defending the country.

One would expect that under the prevailing situation, a
commander-in-chief should have risen up to the occasion, step up
actions, resolve the issues and ensure that all efforts are galvanized
to provide all necessary requirements for our troops combating
insurgency and other acts of violence against our nation.

The PDP therefore urges the military and our gallant fighting troops not
to relent at this critical time, noting that Nigerians seriously
appreciate the sacrifices they make in securing our dear nation.

The party also calls on the National Assembly to save the situation by
immediately using its legislative instruments to wade into the situation
in the interest of the nation.