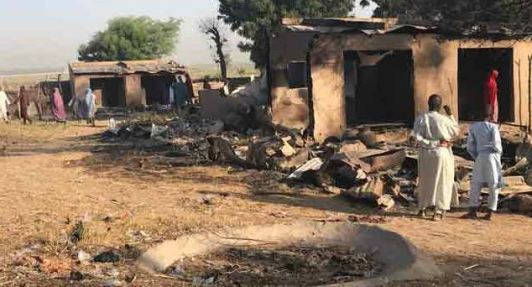 A cult clash has reportedly resulted in the killing of four persons at Afokeplla, Etsako East local government area of Edo State.

It was gathered that no fewer than 10 burnings were either burned down or destroyed in a reprisal from the crisis.

A resident of the community, Mr. Ahmed Seidu, confirmed that the killing was as a result of misunderstanding between members of rival cults groups in the community.

“The crisis escalated when one of the leaders​ of the cult group was shot dead, thereby causing a show of force by the rival groups.

“Since Monday we have been living in fear hoping that the situation will be brought under control by the security agencies,” Seidu said.

The Chairman of the local government area, Aremiyau Momoh, who visited the community, confirmed that 10 buildings were set ablaze.

Momoh said the council have impose curfew from 8pm to 6am in the community, until the situation is brought under control.

“The cult crisis have led the killing of four persons and destruction of 10 buildings in the community.

“The police have commence investigation and very soon those who are found wanting will be brought to book.

“The community is now deviod of its usual busy commercial activities as residents have gone into hiding for fear of attack, while the police are on ground doing their investigation.

“As the chairman of the council, i have impose curfew between 8pm to 6am in the community and anyone found wanting at this hour would be arrested and handed over to the security agencies.

When contacted the Edo Police Public Relation Officer, DSP Chidi Nwanbuzor, said that the Command was not aware of the situation.

“We dont have that report in our Command. I will have to get across to the Divisional Police Officer of Okpella on this development,” he said.