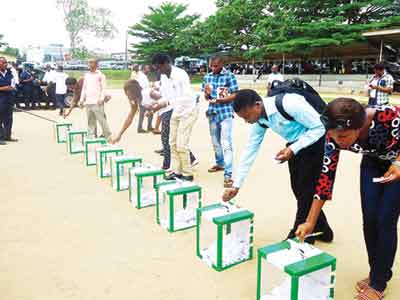 Ballot box snatching, election result manipulation and loss of lives associated with manual voting might soon be history in Nigeria, following the development of an App that could be use to conduct elections electronically,

The App which was developed at Ambrose Alli University (AAU), Ekpoma, Edo State, had been successfully​ tested.

The VC of the University, Prof. Ignatius Onimawo, has said that bthe App was developed to curb the riotous state that student union government elections had created in the past.

“The last 2 student union government elections in AAU were conducted electronically. There is a dashboard and as the votes are being cast, it is displayed on the screen and you can see who is leading and how all candidates are fairing.

“So, it is not a question of go and count result as everything is being displayed as the voting takes place and all the candidates’ agents are there with their laptops and are monitoring it. Whoever wins, we already know.

“We have done this two consecutive times now. No issues, very transparent and we have been telling our colleagues from other universities to also adopt  this method.

“You may not appreciate this if you dont know what have happened before. Sometimes in the past, students get killed during SUG elections and some will carry ballot boxes. All that have been completely eliminated.  Students don’t need to go and queue up anywhere to vote. All you need is your smart phone. Once you log into the portal, you cast your vote and it counts. You can’t vote twice from the same phone.

“We developed the App here and that is what we have been using for our student union elections​,” he said.

The Vice Chancellor further revealed that the institution had successfully engaged  ICT innovation to bring sanity to the academic environment of the school, eliminating issues of missing results, money or sex for marks and other ills.