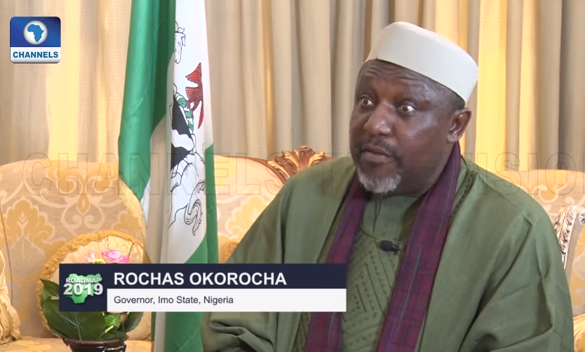 – AND IMO PEOPLE NEVER VOTED FOR THE PARTY & ITS CANDIDATE BUT THE REC, PROF. EZEONU RETURNED THE LOOTING PARTY TO POWER

Members of the Peoples Democratic Party, PDP, in the State are obviously in a hurry to resume their usual looting of the treasury and properties of the State, reading their body languages and considering their utterances especially when they have stayed out of Power for eight years without reprieve.

Since the party’s Candidate, Chief Emeka Ihedioha was fraudulently declared winner of the governorship election in the State following the askance role of the Resident Electoral Commissioner (REC), Prof. Francis Ezeonu, the party and its members have not made any policy statement on where they are taking-off from and where they are going from there.

They are either talking about non-existent N17billion that has been withdrawn by the government or talking about the lands to revoke and the vehicles that have been auctioned or threatening fire and brimstone. And when they were Challenged to say where in Imo one can find N17b to withdraw and whether the money was withdrawn Cash or by transfer, they evaporated.

Imo people never voted for the PDP and would not have voted for the party and its Candidate Chief Emeka Ihedioha, but the REC in Imo decided to return the Party to Power at all cost and by all means for his own selfish reasons. And that has also been the reason Imo people are not celebrating the Contentious Victory of the Party.

This was a party that governed the State for twelve years and has nothing to show for that outing. But Governor Rochas Okorocha has more than one thousand verifiable projects to his Credit. And nobody has disputed this claim.

The only good thing about the PDP coming back to Power even if it is for 3 months is for Imo people to see clearly the large extent Okorocha has assiduously worked and transformed the State. Reason being that it is only when one marries two wives that he would be in a position to say which one is better.

They have only be talking about those frivolous things opponents of the administration want to hear, including money, vehicles, etc. Why have they not talked about whether to Continue with the free education programme or not, or the urban renewal policy, or to Continue with the Six Universities built by the administration or not, and so on. Imo people are waiting for them on these issues.

The PDP administration in the State cannot fly. Imo people know them and what they do, including vendetta, political killings, politically-motivated kidnappings, Gala nights, bathing with expensive drinks like MOET, Hennessy, Xo etc. The story of the PDP in the State this time will be worst than the party’s ugly story for the 12 years it governed the State from 1999 to 2011.

COVID19: CLEEN Foundation calls for the Expansion of PTF to include Women, PWDs & Youths for Effective Representation of all sections of the society