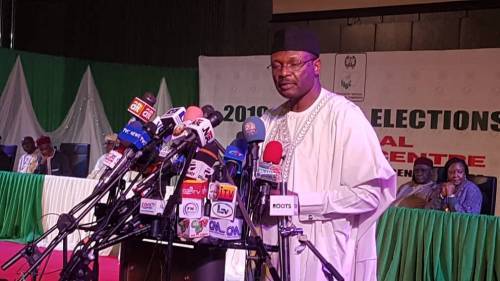 Chairman of the Independent National Electoral Commission (INEC) Professor Mahmood Yakubu has said 98 percent of the 180,000 Smart Card Readers (SCRs) to be deployed for elections have been re-configured to activate at 8am and shut at 10 pm on Saturday.

Yakubu who last Saturday said that the SCRs would take five to six days to reconfigure after the postponement of the polls also stated that the commission’s ICT team would get  the rest of the SCRs ready today (Wednesday).

Contrary to purported invitation of a national commissioner, Prof Okechukwu Ibeanu by the Department of State Services (DSS), the Independent National Electoral Commission (INEC) has said none of its commissioners was picked up by the security agencies.

Speaking at a world press conference in Abuja on Tuesday, INEC Chairman, Professor Mahmood Yakubu, stated that as at the time he briefed the press, the said national commissioner was seated in the office at the commission.

He also dismissed the rumour that Ibeanu’s house in Enugu was invaded, while dispelling the rumour of the arrest of six directors working with the commission by security agencies.

Professor Yakubu also countered President Muhammadu Buhari’s order to shoot on sight any one engaging in ballot box snatching during the elections, saying that there are extant laws on electoral offenders.

On statements by the executive arm calling on INEC to reorganisation of the electoral body, the INEC chairman stated, “All decisions, the administrations of the commission are taken by the commission as an independent constitutional body. We will continue to protect and jealously guard our independence.”

On whether elections will go on in Borno in spite of a recent terrorists attack, Yakubu said, “We have identified 8 local government areas where citizens reside in camps and they all internally displaced persons (IDPs) and not only in Borno but also in other states of the Federation and and the commission, just as we did in 2015, will afford citizens to vote in the internally displaced persons’ camps.

“This will follow the same procedure adopted in 2015. But if there is new security situations that have arisen for which the commission hasn’t taken consideration, which is a new thing, which is not what we have planned for 2019. For all we know, elections will take place in Borno state, in the substantial part of the state, just like other state of the Federation.”

He further stated that by 4pm on Monday, “delivery of materials were virtually identified and addressed.”

According to him these included ballot papers, result sheets and a host of other non sensitive materials now at the locations across the 37 states of the Federation and FCT.

He further said, “Our state offices commenced the process of inviting stakeholders to the Central Bank of Nigeria to examine retrieved materials deployed last week and to witness the batching materials according to local government areas. This is ongoing st the moment and is expected and is expected to be completed today (Tuesday),” Yakubu said.

He also said Registration Area Centres (RACs) would be activated on Friday.

“Our State offices commenced the process of inviting stakeholders to the Central Bank of Nigeria to examine the retrieved materials deployed last week and to witness the batching of materials according to Local Government Areas (LGAs). This is ongoing at the moment and is expected to be completed today Tuesday 19 February 2019.

“The movement of materials to LGAs for batching according to Wards and Polling Units shall take place on Wednesday 20” and Thursday 21, February 2019.

“Personnel and materials should be at the MC: by mid-day on Friday 22, February 2019.

“Refresher training for ad hoc personnel should take place at the RACs: on Friday 22“ February 2019.

“Personnel and materials must arrive at the Polling Units latest 7am on Saturday 23” February 2019.

“Opening of polls nationwide will take place at 8am on Saturday 23″ February 2019.”