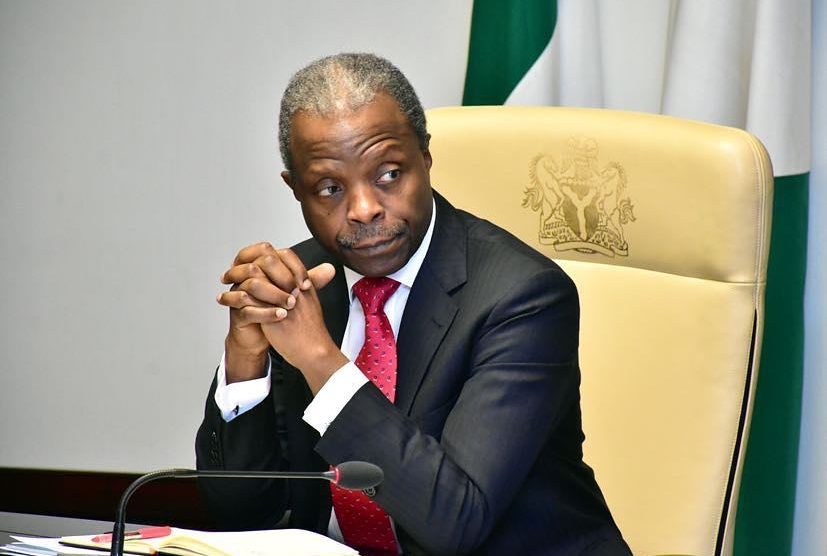 Members of the press, the letter below was emailed to Vice President Osinbajo and his Assistant this week.

I write to you with respect to the unfortunate unfolding developments in the nation following the actions of your government.

Your Excellency will recall that in my congratulatory letter to you I reminded you of the burden of history on you as the first lawyer to serve at such a level (VP Ekwueme obtained his LLB after he left office and Gen Diya obtained his while in the army without the benefit of practice). You are also the first professor and pastor.

It is highly regrettable and most tragic that several years later, you have remained part and parcel of a government that has assaulted the judiciary and destroyed the rule of law on a multiplicity of levels too numerous to elaborate.

I will mention only the latest affront as time eludes one to catalogue the serial and flagrant disregard for court orders or the unprecedented and wholesale molestation of judges.

Your excelllency, as a professor of law, and a distinguished one at that, you are well aware that this offends against elementary principles of separation powers as does the average secondary school level student.

As a lawyer, you doubtless can see that this violates the checks and balances put in place to safeguard the administrators of justice in this case the NJC and the Senate respectively.

Finally even if you were not a learned colleague, as a person and a pastor, this desecrates the constitution which you swore on the holy writ to uphold and defend.

Based on the foregoing, I wish to ask you to thoughtfully consider whether your position is still tenable as a member of the bar in view of your administration’s maladministration of justice or whether on principle you have outlived your usefulness in this lawless regime.

Below are the details of the self-incriminating and deeply indicting recent statements admitting to crass manipulation of the judiciary by the president.

“It is no secret that this government is dissatisfied with the alarming rate in which the Supreme Court of Nigeria under the oversight of Justice Walter Onnoghen has serially set free, persons accused of the most dire acts of corruption, often on mere technicalities, and after quite a number of them have been convicted by the trial and appellate courts. Since there is nothing the Executive Arm can do after the apex court of the land has spoken on any matter, several of these individuals walk free among us today, enjoying what are clearly the proceeds of the corruption which for so long has defeated the efforts of this nation to develop and prosper.” – Buhari January 2019 (on punishing the CJN for not ruling the way he wants.)

Permit me another exhibit:
“Don’t talk even of the US Ambassador (Justice Nsofor.) That one he wrote a minority judgement on my behalf so I paid him back (laughs)”. – Buhari (on rewarding a judge for ruling the way he wants.)

The sum total of these two confessions made this month are that President Buhari is a vindictive, authoritarian autocrat who punishes judges who do not do his bidding and rewards those who do. His hatred for Chief Justice Onnoghen is predicated on this fact which is “no secret” and not really about asset declaration. Since he is “dissatisfied” and “there’s nothing the executive arm can do” (collective) he has done the worst which is to get rid of the “problem” Justice.

You will no doubt agree that it is highly unlikely that a corruption prosecution started by your administration would have reached the Supreme Court within 3 years. Justice Onnoghen has only been Chief Justice for less than 2 years.

A review of that time frame shows that the only notable such case would be your administration’s attempted trial, incidentally by the same CCT, of the senate president on asset breaches.

On appeal, Justice Onnoghen upheld your government’s position that the tribunal was duly constituted and remanded the senate president down for trial. President Buhari clearly was not upset at this ruling which favored him against his political opponent.

However when the matter came back on appeal subsequently, the Supreme Court ultimately resolved issues in favor of the senate president. This obviously drew the ire of President Buhari for which now Justice Onnoghen is paying the price by his own admission.

The question then arises, Prof, are you party to the punishment and rewards of judges system based on their rulings as espoused by Gen Buhari and is this not itself the very essence of corruption?

Do these actions not only amount to manipulation and interference with the judiciary but as a dire warning to intimidate judges to vote pro regime?

In the profession we have what is called “forum shopping” or “jury shopping.” Your administration has introduced “Jurist shopping and dropping.”

President Buhari’s implicating remarks are very clear and explain why a cantankerous 84 year old retired judge rejected by the senate and before that the Supreme Court was foisted on the top diplomatic position in the world.

Prof, I am well aware that you have been subject to intrigues and set ups by unknown entities and cabals. I recall that the US Congress was concerned at reports by a Nigerian minister that you cancelled his trip to the US for bilateral talks during your stint as acting President.

Your office denied there was any such incident and it was clear to me that some rogue elements were trying to set you up.

That said, I wish to know plainly if you ally with the actions of Gen Buhari in the punishment and rewards of judges depending on how the rule.

I ask because during a townhall in Houston with you, I pointedly asked you about the arrest of  judges as damaging to FDI inflows and investors. You said then that as AG Lagos you referred corrupt magistrates to the NJC for investigation – a practice which you were not required to do but you did. I cannot reconcile this with your administration not doing what they are clearly required to do.

I would urge you to prepare your response to this to the bar and to the nation so that your position is historically captured. Whether by commission or omission, complicity or complacency, the time to speak out is now.

Finally I remind you that you personally saved this nation and this administration from a constitutional crises by appointing Justice Onnoghen in the first place. The undoing of your well-received action undermines you personally and professionally and calls into question your ability to serve effectively in an administration that clearly is keen on driving Nigeria aground.

A Nigerian proverb says in sympathy for the dead, a fly should not follow the corpse into the grave. I would remind you that your famous and esteemed father-in-Law Obafemi Awolowo honourably resigned from the cabinet of an officer and a gentleman like General Gowon of whom he was highly beloved. With all sincerity sir, you cannot be the Abobaku for General Buhari.
Thank you for your kind attention.