Home Reports I Killed, Slept With My Mother’s Corpse For Money, Teenager Confesses In... 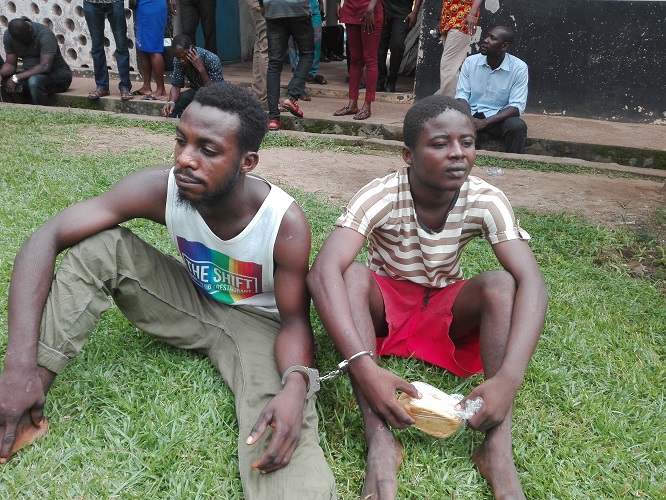 Two murder suspects were on Wednesday paraded by the Edo State Police Command.

The suspects were among 84 suspects paraded by the police for various crimes ranging from cultism, kidnapping, rape, armed robbery, murder and burglary.

There was 18-year-old Akpobome Samuel, who confessed to killing his mother, Mrs. Gift Samuel, by strangulating her and also slept with her corpse for money making rituals, at Ologbo, Ikpoba-Okha local government area of the state.

The other murder suspect was 20-year-old Odion Jimoh, who beheaded a man identified as Asuelimhen Atogwe, at Ayogwiri, in Edo north.

The teenage murder suspect who confessed to his crime, said he acted on the instructions of the native doctor whom he contacted for money rituals.

He said the native doctor told him that after killing his mother, he should sleep with her corpse in order to get rich and that he willing complied with his instruction and killed her.

Akpobome who said he worked in a sarchet water packaging factory in Ologbo, said he was caught by his grandmother who came to knock at his door having waited patiently for the deceased to accompany her to church.

It was gathered that the grandmother caught the suspect in the act, while having sex with his mother.

He said he had only slept with the corpse once said his grandmother raised the alarm that attracted the attention of the people around when she saw the lifeless body of his mother on the floor.

“The native doctor told me to kill my mother and sleep with her corpse, but he did not tell me the number of days to sleep with her. He told me to keep her dead body inside the room for two days but I was caught when I could no longer keep it.

“I did not know that my grandmother was sitting outside. She opened the door and sighted me in the corpse inside the room and raised the alarm that drew the attention of the public.

“My mother did not offend me. I killed her because of the money,” he said.

On his part, Odion Jimoh who beheaded his victim, said he did not no what came on him before he committed the murder.

“Honestly, the man did not do anything to me. I don’t know what came over me,” he said.

Police sources had it that the victim who worked as a carpenter, was contracted to work at a house where met the suspect weeding, and asked him why he was not at the community age-group festival.

It was gathered that the suspect who was already high after smoking substance suspected to be marijuana, felt slighted and humiliated by the victim’s action, and went after him, hit him on the neck with a wooden object before beheading him with a cutlass.

The source added that the suspect was later arrested at an uncompleted building, after the man who contracted the victim raised the alarm when he discovered the lifeless body of the man and his head beside him.

The Aare Ona Kankanfo of Yoruba Land, Iba Gani Adams, on Monday said that the successful implementation of...
Read more