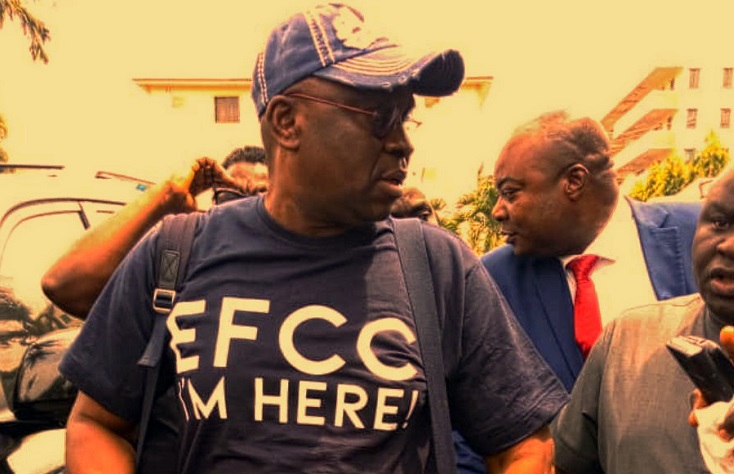 As the trial of former Ekiti State Governor,  Mr.  Ayodele Fayose, for
alleged use of N1.3 billion from the National Security Adviser’s (NSA)
office to fund his election in 2014, is set to begin at the Federal
High Court, Ikoyi, Lagos, an Abuja based Civil Society group has said
the trial will be questionable without the arraignment of former
Minister of Defense, Senator Musiliu Obanikoro and his sons; Gbolahan
and Babajide.

The group, Society for Rule of Law in Nigeria (SRLN), said since the
N4.7 billion from which Fayose allegedly got N1.3 billion was paid
into the account of  Sylvan McNamara Nigeria Limited owned by
Obanikoro’s sons, it remained to be seen how EFCC will successfully
prosecute the alleged receiver, leaving those who collected the money
from the NSA.

In the statement issued on Sunday and signed by its National
Coordinator, Dr. Chima Ubeku, the SRLN said that; “according to EFCC,
N4.7 billion was paid into Sylvan McNamara Nigeria Limited account in
Diamond Bank through the NSA office between April 4, 2014, and
December 15, 2014.

The SRLN said assuming but not conceding that Fayose actually got the
fund in question as claimed by the EFCC,  how can a ‘danfo’ or ‘molue’
bus have an accident and we leave the driver who drove the bus and
charge the conductor to court? That, exactly, is what a compromised
EFCC under the influence of an equally vindictive Presidency is doing
in the Fayose case.

The group said it was on the basis of the alleged involvement of
Obanikoro’s sons in the deal that they were declared wanted in 2016 by
the EFCC and the question now is, what has changed?

“Today, Babajide Obanikoro is a House of Representatives candidate of
APC in Lagos while his father is in the United States of America,
enjoying himself.

“Can it now be concluded that the once wanted Obanikoro’s sons  stayed
away from Nigeria until they negotiated their way into the APC and
their father sins were washed away with his rights to travel outside
Nigeria restored the moment he joined the ruling party?

The group, which accused the APC government of President Muhammadu
Buhari of using the EFCC to muffle the opposition, blackmail judges,
and neutralise voices of dissent through selective application of the
law, said the anti-graft agency’s partisanship has further been
demonstrated with the Fayose case.

Before delving into my subject let me asks God forgiveness for believing only GMB can change the country without ...
Read more