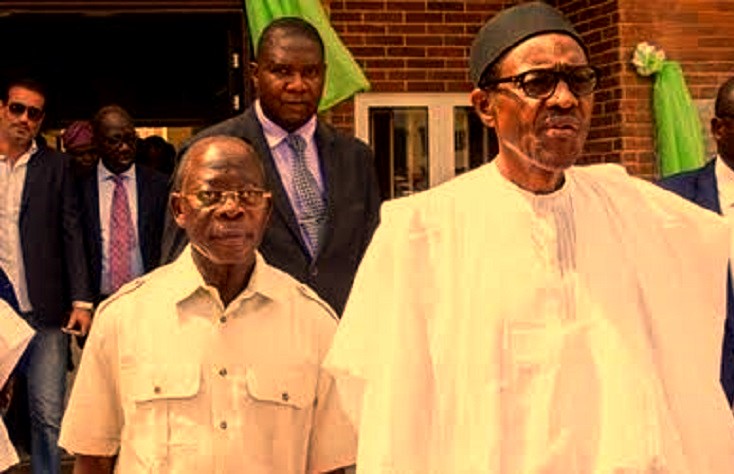 Information coming out of the presidency indicates the squabbles emanating out of the All Progressive Congress [APC] following the cantankerous national and state wide primaries – maybe over. This is going by the information received by 247ureports.com from a reliable source indicating that the President of Nigeria and the leader of the APC has doubled up his support for the embattled National Chairman of the APC, Adamu Aliyu Oshiomhole.

The national chairman of the APC who found himself caught up in an engulfing web of dispute with disgruntled APC chieftains, Governors, Lawmakers and others over the manner the primaries were contested – was reportedly arrested by agents of the State Security Services [SSS] over allegations of bribery and other financial crimes. He was interrogated by the agents for a total of 9hours and released. Oshiomhole denies being arrested but acknowledges being ‘interviewed’ by the agents.

The SSS agent during the interrogation demanded for Oshiomhole’s resignation from the position of APC national chair. He was threatened with public prosecution should he refuse to step down. Other State governors under the APC banner had also called for the resignation of Oshiomhole.

Until today, it was not certain which side of the line President Buhari and Bola Tinubu will tow. Rising from a meeting held today between the President, Tinubu and Oshiomhole – an agreement to further solidify the support for Oshiomhole was reached. The President pledged to continue backing the embattled APC national chairman.

Meanwhile, the troubles bedeviling the APC appear to continue to ferment unhindered.