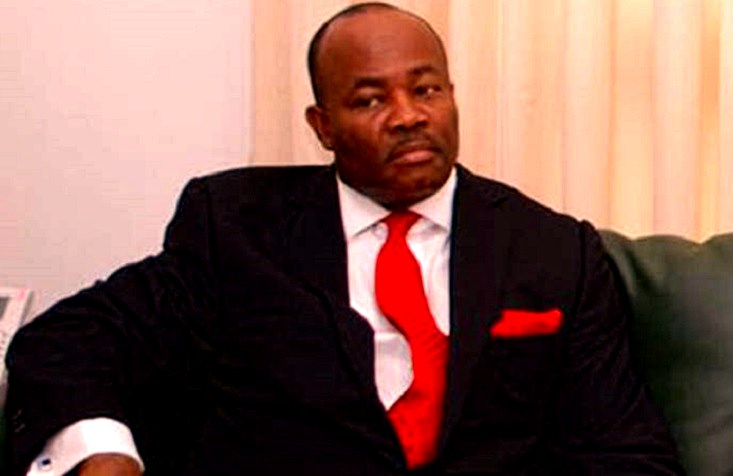 Exclusive: How Akpabio Abducted, Detained Me In His House Over Refusal To Step Down For Nse Ntuen – Essein Udim AHKA Aspirant

An APC aspirant for the Essien Udim House of Assembly seat, Mr Samuel Ikpa on Tuesday gave a graphic account of his abduction and incarceration in the hands of former Senate Minority Leader, Senator Godswill Akpabio.

Speaking to newsmen in Uyo during a protest and solidarity visit by his kinsmen from Midim community in Uyo, Mr Ikpa said he was subjected to inhuman, cruel and barbaric treatment by the former Governor for refusing to step down for his (Akpabio’s) annointed candidate for the Essien Udim State Constituency seat.

On the night of Sunday September 30, 2018, I was invited by His Excellency Senator Godswill Akpabio to his residence in Ukana Ikot Ntuen for a meeting. The agenda of the meeting was not made known. On my arrival in Ukana Ikot Ntuen, I met other aspirants including Hon. Nse Ntuen, Hon. Etido Ibekwe, Abom Ephraim Okon, Joseph Inyang and Anthony Etim who were already seated. Also seated were his Excellency Senator Godswill Akpabio, Bar. Ibanga Akpabio, Etekamba Umoren, Hon. Emmanuel Sunday Akpan, Godwin Afangideh, Sir Simon Etim, Nsentip Akpabio, Arc. Ubokutom Nyah and a host of personal staff and family”

“Senator Akpabio said me and all other candidates for the House of Assembly must step down for his cousin – Nse Ntuen and vaguely promised to use other positions in the incoming state and federal governments to compensate us. I pleaded with him to reconsider his position and allow the will of the people to prevail. I reminded the senator of the enormous effort and resources expended on campaigns already, the goodwill of teeming supporters who are yearning for change and whose trust I cannot betray, and the need for true progressive culture of politics to be entrenched in the best interest of democracy”, he stated.

Mr Ikpa said his position infuriated Nse Ntuen who then accused him of being agent of malice and chronic opponent of Senator Godswill Akpabio’s directives.

Then came the unthinkable moment, “Senator Akpabio rose up and physically assaulted me and ordered his security details to arrest me. I was dragged like a common criminal out of the meeting room. My brother – Celestine Mel – who was waiting outside, was shocked to see the assault on me and sought to know what was happening. He too was promptly arrested on the orders of an enraged and bitterly angry Senator Akpabio. Both of us were rough-handled, beaten, assaulted and thrown into a van with their phones were seized”

The APC aspirant said  he and his brother were abducted against their will, and driven in a convoy to the police headquarters in Uyo to be detained by the senator.

He alleged that the convoy left the Police Headquarters after spending 15 minutes to Baracks Road Police State, Area Command, Uyo before being were driven finally into Akpabio’s private residence in Ewet Housing Estate in Uyo, where he was humiliated, harassed, scoffed at, and spat upon.  He said he was made to sit on bare the floor at Akpabio’s house while Senator Akpabio and his team did all they could to maximally break his spirits by demanding he withdraws from the race.

He lamented that the traumatic experience lasted until 4.30am on Monday morning and caused him serious emotional, physical and psychological pain.

According to Mr Ikpa, he owes his life to the APC Governorship candidate, Obong Nsima Ekere, who intervened on his behalf before Akpabio freed him and was later driven in a car provided by Akpabio’s former Chief of Staff and later Secretary to the State Government, Sir Etekamba Umoren to enable him pick his personal car that was parked at Akpabio’s Ukana residence.

He condemned the return of impunity and intimidation in an entirely purely democratic process and called on President Mohammadu Buhari, Vice President Yemi Osinbajo, the National Chairman of APC,  Mr. Adams Oshiomhole, National leader of the APC, Senator Bola Ahmed Tinubu, Leader of the APC in Akwa Ibom Atuekong Don Etiebet, Senior Special Adviser to the President on National Assembly ,Senator Ita Enang, State Chairman of APC, Mr Ini Okopido, and all well-meaning Nigerians to come to his rescue by prevailing upon Senator Godswill Akpabio to discontinue his unending attacks and vicious dehumanizing treatment on him and his community.